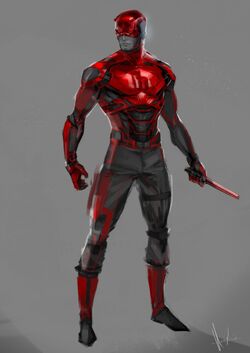 I don't have to see you to know you're afraid.

Matt Murdock was a struggling lawyer in Hell's Kitchen. He was eventually approached by Potts International, who told him he tested positive for Inhuman DNA. Matt was put through the process of Terrigenesis and emerged having lost his sense of sight, but now being able to sense his surroundings on a much more intense level by using his other senses. Additionally, he was now exceptionally acrobatic and began training to become an expert fighter.

Matt took on the moniker of Daredevil and began operating on the streets at the behest of Potts International, occasionally taking out some of their targets of interest.