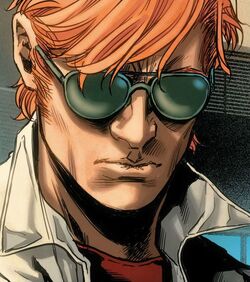 After his father was murdered by illegally-enhanced hooligans, Mattheus Marcel Murdoch (or simply just Matthew and Matt for short, as he would prefer) dedicated his life for years into fighting injustice in Squadron City, New Troy as a lawyer by day with his law firm, and by partly as a well-respected and honored lawyer at his former college, the Erskine University and his former law school at Lawbound Academy. Throughout his years learning to become a very skilled lawyer, Matthew befriended several individuals, including his oldest friend Foggy Fisk, and Karen Paige, the latter whom he would become attracted to later on, developing a romantic relationship with her to the point where they later eventually, got engaged. Matt was also known for his thrill-seeking and adventurous personality among his closest friends and family, earning him the nickname of "Daredevil," a nickname that he didn't hate, but also at the same time he didn't really like hearing it.

During the great historical event known as the Golden Age of "Superhuman Revolution," Matt was one of those individuals in the community who had a huge concern regarding the legalization of using the "Super-Soldier Program" and other classified methods to enhance authorized individuals, such as the military and the police to fight off the extreme rise of crime. Remembering the death of his father, he had thought that although it could help the authorities, there could still be a large possibility that these biological weapons could be fallen into the wrong hands and its usage could be abused.

As a result of growing concern, Matt started becoming an activist against the superhuman program (briefly) and decided to establish a public committee to stop the extension of legalization sooner, before it's too late. At first the committee was weak among the public despite their best efforts, but eventually and importunately, it grew more and more supporters all around the world from time to time, until the higher government finally got their attention and started listening to their ideals on the current issue.

While driving in Cosmopolis with his fiancée Karen, Matt and the rest of the residents were in horror as they watch in deep horror, during the battle between the alienated hero Hyperion against a mutiny led by a super-soldiered mass murderer known as the Scoundrel. The ultimate battle resulted in an innumerable amount of destruction throughout the city of Cosmopolis, and cost the lives of many. Sadly, one of those who perished was sadly Karen, after Matt failed to save her from the falling debris of the collapsing infrastructures. Matt attempted to call an ambulance, but it was too late. Karen died in his arms, telling her fiancé that she was really happy spending her years together, and tells him that she loves him 'till death. Matt wept and mourned, while holding her beloved's lifeless body.

Weeks later, due to the chaos and destruction caused by the Battle of Cosmopolis, the United Nations of the entire world finally banned the usage of experimental enhancements by means necessary, and all of it was made possible by the efforts of Matt that he had worked for in years, only to realize that Matt has lost the very one person that he loved, feeling empty without Karen in his life.

Months after Karen's passing, Matt remained unmoved with his life still grieving for losing her, until he found out that Karen was supposedly going to be a professor at Erskine University, after she accepted an offer from her co-worker and best friend, Elektra Fisher. Because of this, Matt had thought of the noble and honorary thing and decided to fulfill his beloved's wish, becoming a professor at law.

Retrieved from "https://marvelcomicsfanon.fandom.com/wiki/Mattheus_Murdoch_(Earth-61712)?oldid=240613"
Community content is available under CC-BY-SA unless otherwise noted.