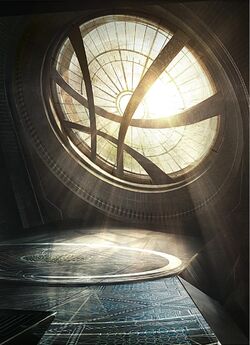 The mystical organization that was the Masters of the Mystic Arts originated in the time of the legendary Agamotto, and through the centuries developed as an order dedicated to protecting the world from mystical threats, aware that the universe was anything but one. As years have passed to the modern era, the ancient order came to be led by then-latest Sorcerer Supreme, a seemingly immortal Tibetan woman named Yao, who was known only to her followers as the Ancient One, and concentrated their power base at four sites: the Ancient One's own sanctuary of Kamar-Taj, and the three "Sanctums" located in places across the globe where major cities eventually grew: New York Sanctum, Hong Kong Sanctum, and London Sanctum.

However, later on at some point during the first years of 2000s, the leadership of the Ancient One would face the greatest challenge in the form of her former student, Kaecilius, who had became completely delusional as he was corrupted by the so-called "promises" that the Dark Dimension could offer and sought to bring the diabolical entity Dormammu to Earth. In the midst of her war against Kaecilius and his Zealots, the Ancient One encountered the once desperate and once narcissistic Doctor Stephen Strange, to which in spite her initial reluctance, was persuaded to accept him as her student by the faithful and loyal Karl Mordo. During one final battle, the Ancient One was fatally wounded and despite the best efforts of Strange and Metro-General Hospital's passionate ward Christine Palmer, she accepted her fate on that day and finally died peacefully, but not before giving Doctor Strange the advice he needed to defeat Dormammu as well as to find his new purpose in life as a master of the mystic arts, officiating that she was grateful to pass on the mantle of Sorcerer Supreme to Strange himself, whom she sincerely believed and considered to be the best among the sorcerers she has encountered for the past millennia.

During the Chitauri Invasion of the late 2000s, in order to protect the Eye of Agamotto (which was later revealed to be an actual miniaturized, modified piece of the cosmic Time Stone), the new, current leader and Sorcerer Supreme Doctor Strange and other sorcerers protects the New York Sanctum from the invading Chitauri and continued doing so until the Avengers directed a nuclear missile launched by the World Security Council into the wormhole present in the sky, destroying the Chitauri Command Center and effectively sealing the portal, ending the battle.

Retrieved from "https://marvelcomicsfanon.fandom.com/wiki/Masters_of_the_Mystic_Arts_(Earth-61615)?oldid=263879"
Community content is available under CC-BY-SA unless otherwise noted.