My past? I have no past! I am the Master of Hydra! The one destined to peace to this world you dare oppose me?

Master Hydra is current leader of HYDRA he is the former protege of Red Skull. Some time after the HYDRA civil war it was believed all the top brass were killed or incarcerated however one year later in the Middle East a new Hydra would reemerge with Master Hydra at the lead. 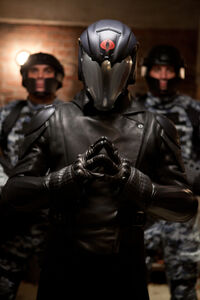 Very little is known of his past some speculate he is an American soldier captured during the War on Terror and experimented on by Hydra to test a new version Super Soldier Serum. Others speculate he may have been an average HYDRA soldier that rose up the ranks later to be mentored by Red Skull. One of the most outlandish claims yet is that he's the son of Madame Hydra herself. All that is known about him is that he rallied scattered terrorist cells in the Middle East as well as gathered the remnants of Hydra to reform it in his own image. So far is goals have been focused on what he calls "purifying" The Middle East and forming his own country under HYDRA rule.

However no one not even Master Hydra himself is fully sure of his origins.

Retrieved from "https://marvelcomicsfanon.fandom.com/wiki/Master_Hydra?oldid=89583"
Community content is available under CC-BY-SA unless otherwise noted.