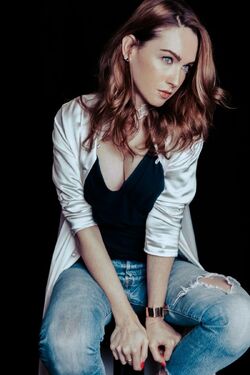 You know my job is making you guys look good, and you're making it really hard for me!

Mary Jane Watson went to ESU with Peter Parker, where the two became friends. However, they lost contact after graduating and MJ went on to work for Potts International as their head of Media Relations. It was there that she was reintroduced to Peter, now the Squadron Supreme member Spider-Monkey, and the two fell in love.

Mary Jane has vague knowledge about the truth of the Squadron, but chooses to believe that Peter and the others are truthfully good people, but they just do dumb things sometimes. She is friends with CEO Juniper Potts, but secretly does not like her very much.

Retrieved from "https://marvelcomicsfanon.fandom.com/wiki/Mary_Jane_Watson_(Earth-1515)?oldid=245053"
Community content is available under CC-BY-SA unless otherwise noted.