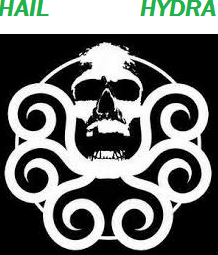 Marvel Unleashed: HYDRA War was a limited series event in the Earth-606 universe. It features a team up between Malekith, Lord of the Dark Elves, and Helmut Zemo, the new leader of HYDRA.

Nick Fury watches over the attack from the SHIELD Helicarrier. HYDRA fighter jets, shooting everything in sight. Dark Elves, attacking innocent people in the streets. He's had enough. Maria Hill walks up to him, and he tells her to send in Hawkeye's team. Hawkeye, SHIELD sniper, Black Widow, deadly assassin, Mockingbird, martial arts master, and Tigra, half-human half-tiger super soldier. The four agents are sent into the city, and they split up immediately. Hawkeye takes to the rooftops and begins shooting down fighter jets. Mockingbird takes on Dark Elves in the streets. Black Widow and Tigra focus on saving people.

Flying through the air is Eric O'Grady, the new Ant-Man, riding on the back of a winged ant. Next to him is Janet Van Dyne, the Wasp. Former love of the now deceased Hank Pym. The two have never met but they have to work together. They attack the dozens of fighter jets. O'Grady's ants swarm over the windshields, blocking the view of the pilots, and causing them to crash. Janet uses her electric zaps to repeatedly shoot the jets. Below, the X-Men arrive. Polaris uses her magnetic control to destroy the jets in the air, clearing out the entire sky. HYDRA tanks approach her, but she destroys them all. Goliath turns giant and reaches down to pick people up out of dangerous spots and carry them to safety. Sauron zooms into the air and swoops down upon the HYDRA agents and Dark Elves, carrying them up into the air and then dropping them to the ground below.

Iron Man, War Machine, and Stingray fly into battle. They wipe out the villains from above. Bruce Banner flees from a building. He has no idea what's going on. He just hopes Betty is okay. Betty... he hasn't seen her for years. Not since the Hulk came into play and ruined everything. He tells himself it's all right. It's all behind him. He's going to anger management. He won't have to see the Hulk again. Whatever's going on... whatever this is... if it's the end of the world... if it's World War III... he's okay. He can make it without having to get angry. He can do it. For Betty.

From the sky, there is a bolt of lightning. Rain starts pouring down. The clouds in the night sky drift apart. A man comes flying down, followed by somebody else. They land down on the ground. Thor and his brother Loki. Here to stop Malekith. Thor tells his brother that it's time. They must bring back the Thor Corps.

Blake Boltagon and Madelyne Amaquelin, an average Inhuman couple, are rushing to safety with all the other civilians of New York. Madelyne is carrying her pug, Lockjaw. Suddenly, a blue flash of lightning appears in the sky. A tiny, dog-sized hammer drops to the ground. Lockjaw bolts out of Madelyne's arms and lifts it up in his mouth. He is struck by a bolt of lightning, and when the light clears out, he is wearing Asgardian warrior armor. He flies into the air, and Madelyne yells for him. Blake tells her that Lockjaw has some sort of powers, and he'll be able to protect himself and find his way back.

In deep space, former Kree soldier Mar-Vell is soaring through the dark void, chasing a Kree battle-ship. Out of nowhere, a flash of blue light appears. When the light clears out, there is a blue hammer. Mar-Vell realizes what's happening and grabs it. Electric energy surges through him, and his Kree battle armor turns gold. He strikes the Kree battle-ship with lightning, destroying it, and flies toward Earth. Back in New York, Jane Foster is cornered by Dark Elves. Lightning strikes in front of her, knocking back the elves, and a hammer identical to Thor's lands down in front of her. She lifts it up, and lightning strikes her, giving her Asgardian armor.

Thor and Loki (wielding a glowing green hammer) stand amidst the chaos. The Thor-powered Lockjaw, Mar-Vell, and Jane Foster fly to them. Thor tells them the Thor Corps has reassembled. Jane asks where Captain America is, and Loki says he could not sense him in this reality, meaning he must be out on some other plane of existence. Mar-Vell asks about Beta Ray Bill, but Thor says he recently died while helping save Asgard from an evil troll. Loki explains to the Corps that Malekith, an evil Dark Elf bent on taking over Asgard, has arrived on Midgard and joined forces with HYDRA.

The Thor Corps charge into battle, taking down villains left and right. Lockjaw saves a little girl from a Dark Elf gladiator, and flies her over to her parents. Mar-Vell lures some Dark Elves into a nearby gas station and then blows it up with a lightning blast, killing the Elves. Jane rescues trapped tourists on Ellis Island, and flies them all over to safety. Thor and Loki fight off several hordes of Dark Elves, striking down lightning left and right. Loki uses a spell to open a portal that transports all the Dark Elves into Jotunheim, the Frost Giant dimension, where they are all ruthlessly killed by Frost Giant guards.

At the HYDRA Base, Shadowcat and Iron Fist burst in. Zemo asks how they found out the location of the base, and Shadowcat tells them that Jean Grey sensed Malekith's location with her telepathic powers. Jean Grey's New Mutants enter behind the two heroes, and attack Malekith and Zemo. Iron Fist kills Zemo by punching a hole through his chest, but Malekith uses dark magic to escape. Several HYDRA agents rush in, but Lockjaw flies in out of nowhere and strikes them all with lightning. Iron Fist asks Shadowcat if she saw the flying dog as well, and she just shrugs her shoulders, saying that they've seen weirder things in the past few days.

Shadowcat contacts the other Avengers, telling them that they found the secret HYDRA base, but Malekith escaped. Outside, Quicksilver zooms through the streets, saving civilians, as Scarlet Witch levitates a bunch of Dark Elves off of the ground, and then sends them flying directly into the Sun, killing them. In Queens, Spider-Man arrives at his Aunt May's house, and sees that she is gone. He is freaked out, but hears his cell phone (which he left on the kitchen table) ringing. He answers it, and Aunt May tells him that she's at a safety shelter beneath the old Avengers Mansion. She asks if he's okay, and he lies, telling her he is at another safety shelter. He promises her that everything will be alright, and he hangs up.

Issue 3: Into the Bifrost

In Asgard, Heimdall watches over the chaos going on below him in Midgard. He realizes that Malekith plans on taking over Asgard next, and so he warns Odin. At the HYDRA Base in New York, the Thor Corps battle the HYDRA soldiers. Shadowcat and Iron Fist find Baron Zemo and Malekith, who are about to activate a special portal. Zemo reveals that the base was built over a special warp spot, where the barrier between Realms was especially weak. The portal opens, and the two villains escape into the Bifrost. Shadowcat, Iron Fist, Thor, Loki, and Lockjaw rush in before the portal closes, and they find themselves transported to Asgard.

In Asgard, the heroes go to see Odin, and request help for finding and defeating Malekith. The Warriors Three, Sif, and Balder offer their help.