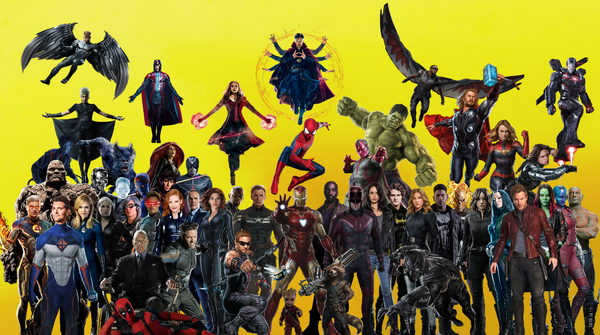 The Marvel Cinematic Universe (abbreviated as the MCU), also nicknamed as the Marvelous Cinematic Universe, is a media franchise and shared fictional universe that is centered on a production of superhero films and television series, independently produced by Marvel Studios and based on characters that appear in publications by Marvel Comics. The franchise has expanded to include comic books, short films, and television series. The shared universe, much like the original Marvel Universe in comic books, was established by crossing over common plot elements, settings, cast, and characters. This version of the Marvel Cinematic Universe is created by MarvelousMarty and this version of the Marvel Cinematic Universe, Marvel has taken the rights to Fantastic Four and X-Men from Fox along with Spider-Man and his characters from Sony (though Sony was granted permission by Marvel Studios to make their own Spider-Man Trilogy due to its first movie being a success) and the full rights on the Hulk, Namor, along with its characters from Universal. This new state has altered much of the history of the real MCU reality, and has added more additional films, skipped some of them, or moved them into streaming or television throughout the years. Aside from some notable creative differences in the stories and directions of the original films, different casts for characters in several original films have also been an occurrence in this reality, such as in the first X-Men film (2000).

Phase One: Age of Heroes