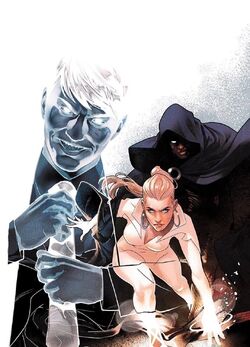 Come on now... Of all people, why ya'll gotta be so negative?

Martin Li was born somewhere in Dali, China. At some point in his early childhood, he and his parents immigrated to the United States in his early childhood. During the late 1980s, Li and his parents desperately came to the controversial scientific conglomerate Roxxon Corporation in its well renowned branch in New York, for medical consultation regarding an unknown serious medical condition that Li had genetically obtained before.

At first, an anonymous representative of the notorious Maggia Crime Family, offered Li's parents to help treat his son in his worsening condition, only in exchange of their lifetime service and loyalty to the standing criminal faction. They immediately declined the offer, knowingly aware about the Maggia's infamous history of enslaving and manipulating immigrants in the country for the past generations since it was founded, coming from many different nations across the globe. Disappointed by their rejection, the Maggia decided to punish them for declining the offer of serving the criminal organization as an act of "teaching them a lesson" not to mess around with them in any sort of circumstances.

The leading pharmaceutical chemist supreme of Roxxon at the time, who was the genius but somehow greedy scientist Doctor Simon Marshall, had Li injected with the experimental serum known as GR-27. The treatment triggered a reaction that resulted in the death of Li's beloved parents and Li receiving superhuman powers, triggering a reaction that caused Li to gain volatile "negative" superhuman powers. Unbeknownst to Li until later on, the "accident" was supposedly set by the Maggia themselves after making a deal with Marshall to make it seem like a failed experiment. He was left in an orphanage, where he grew up knowing the pain and suffering that the neediest had passed for the past several generations within the unequal and unjustified society.

Due to this traumatizing experience, Li was decided to change the world in some way. He also carried a deep hatred towards Roxxon, the Maggia, and the rest of the most corrupted and two-faced organizations across the New York, deeply wanting revenge on them as they ruined his life forever. Also over time, Li came to understand how to control his powers, even discovering new abilities, such as corrupting people, and imbuing items with his corruptible touch. Thanks to the effects of the serum and Li's unique biology when he was sick, he had developed super-powers related to Darkforce and the Lightforce, two dualistic energies originating from two mysterious dimensions of the same name.

Li has now faced with two distinct personalities; With one being described as a demon, bloodthirsty for revenge and destruction, to which this persona of his would eventually be infamously named as Mister Negative by his future adversaries and the local authorities, and the other one was a good, selfless and charitable person, sincerely and continuously using his unbelievable fortune and wealth to create the shelter organization called Food, Emergency Aid, Shelter and Training, also known as F.E.A.S.T.

His efforts to help the poor represented Li's good side, but secretly, Li started corrupting other Chinese immigrants on the city, aiming to create his own powerful criminal faction, the Inner Demons. As Mister Negative himself, he secretly dedicated himself to becoming Chinatown's Kingpin of Crime, intending to dominate and even erase, if necessary, every other organization who gets in his way from achieving his long-time vengeful goal against those who had wronged him and the needy and poor people he always deem to help from time to time.

Later on at some point in then present day, during the late 2000s, Li's criminal faction continued to commit illegal transactions with most of the infamous Triads across New York City as a part of his vendetta in taking down several secretly rogue and unhinged organizations, especially Roxxon Corporation, until one of their discreet transactions inside a warehouse in Brooklyn, were eventually found and foiled by the new crime-fighting duo in town known as Cloak and Dagger.

With the combined efforts of the inseparable heroes, their might and power almost made them succeeded in exposing Li's darker persona and criminal actions for the past decade, only to be counteracted by the Mister Negative's far more experienced combat knwoledge and skills and using his power from both the Darkforce and Lightforce against Cloak and Dagger themselves, taking the latter down with ease. With Li now knowing that two other individuals have the same power source as him, he tried to have in his attempt to absorb their own powerful energies onto himself, even if it would kill the two youngsters in the process.

However, this attempt of Li was thankfully interrupted by his frequent adversary, the friendly neighborhood web-slinger Spider-Man, who was willingly accompanied by an NYPD tactical unit led by then Captain Jean DeWolff with Simon Marshall, the same man who was responsible for transforming Li in who he was now to begin with. Seeing Marshall face to face after several few years, Li was filled with uncontrollable rage, unleashing his ultimate power against the heroic rescuers trying to finally have his bitter and brutal revenge on Marshall.

Despite having to confess that the Maggia was the real masterminds behind both of his parents' deaths, Marshall was nevertheless captured and mercilessly killed by Li out of unforgettable vengeance, much to the heroes' great dismay after successfully rescuing Cloak and Dagger with them, and escape the warehouse in order to recover from Li's wrath in the meantime. Days later after the incident, when Li's identity as the was finally exposed to the public, both the local heroes and authorities of New York City tried to find Li the during their last encounter at the abandoned warehouses, and although they did find and apprehend most of the Inner Demons who defended it, Li was nowhere to be found, leaving his whereabouts unknown.

Weeks have passed since Li's disappearance from the face of society, the legacy that Li's altruistic side has left on the city, which was the charity organization F.E.A.S.T. itself, was now being governed and led by the hands of May Parker, Li's most trusted subordinate and former friend, before eventually retiring from the latter position after almost four years, as she handed it to another unnamed younger work associate, who was seemingly just as sincere and dedicated as May was running the shelter to help the homeless and needy with all they can, without any exchanges whatsoever. However, unbeknownst to everyone, Li was revealed to have travelled somewhere within the Fujian province in China, and was last seen ruthlessly slaughtering several abusive soldiers from the People's Liberation Army with his powers, despite their continuous pleas of surrrendering to Li.

Darkforce & Lightforce Manipulation: As a result of his exposure to the biochemical weapon known as GR-27, more commonly known as the "Devil's Breath" since he was still a child, Mister Negative can generate and control the Darkforce & Lightforce, manifesting it as the photographic negative of black or white electrical energy. He uses this unique form of Darkforce for a variety of purposes, including but not limited to:

Retrieved from "https://marvelcomicsfanon.fandom.com/wiki/Martin_Li_(Earth-61615)?oldid=223378"
Community content is available under CC-BY-SA unless otherwise noted.