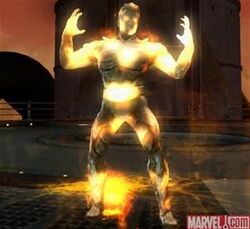 Little is known about Molten Man's life before the Civil War. It can be assumed to be similar to his mainstream counterpart.

Molten Man was among the supervillains under the control of the nanites used by S.H.I.E.L.D. He is used to assist the heroes in fighting Goliath. Molten Man is seen with She-Hulk attacking Cloak and Dagger until the Liberty Squad arrive. When the nanite network revealed its sentience during the attack on Prison 42, Molten Man is among the supervillains that attacked both sides. He's later seen attack the heroes after they replaced the power cores needed to power up the portal that leads out of Prison 42.

After the Fold's defeat, Grey Gargoyle one of the villains scarred by the events months ago to the point of suicide.

Molten Man's fingers are particularly sensitive to sound, making him a highly skilled safe-cracker. He is also a highly skilled chemical engineer, partially responsible for developing the alloy that is bonded to his skin. While he has had no formal training, his powers make him a formidable combatant.

Retrieved from "https://marvelcomicsfanon.fandom.com/wiki/Mark_Raxton_(Earth-6109.2)?oldid=154714"
Community content is available under CC-BY-SA unless otherwise noted.