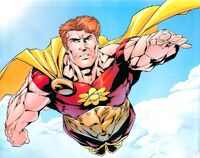 I may not be of Earth, but it's my home nonetheless.

The baby that would be known as Hyperion was rocketed from Titan during the planet's destruction to Earth. He was found by Peter Milton in Valentine County, Nebraska; who taught him strong moral values. When he grew up, he moved to Cosmopolis and used his superhuman abilities as Hyperion.

A Family of His Own

Mark would settle down with Lonni Lattimer and the two would have a child named Pete, named after Mark's father. Pete inherited his father's powers and after they manifested, Mark began teaching his son to control and utilize his powers as Hyperion, Jr..

Retrieved from "https://marvelcomicsfanon.fandom.com/wiki/Mark_Milton_(Earth-32)?oldid=253334"
Community content is available under CC-BY-SA unless otherwise noted.