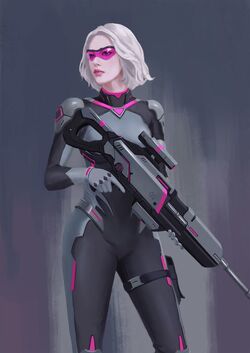 When I first went through Terrigenesis, I was pretty confused... to say the least. But it's said that Terrigenesis brings truth to what's already on the inside. And I can honestly say that in my experience... it's pretty accurate. The world may be in a state of total shit, but I've never been happier.

Baron Wolfgang von Strucker was the modern leader of Hydra, and S.H.I.E.L.D.'s #1 most wanted. He raised his son, Marcus, outside of the family business of Hydra, completely unaware that his son was struggling with depression and gender dysphoria. Following the rise of Apocalypse, S.H.I.E.L.D. diverted most of their attention away from Hydra, and soon both organizations began crumbling.

Marcus later betrayed his father and teamed up with S.H.I.E.L.D. Agent Quake, with whom he discovered that he was a dormant Inhuman. He allowed Quake to put him through the process of Terrigenesis, and when he emerged, he found himself completely transformed into a female body, and with the ability to manipulate people's emotions through pheromones.

Renaming herself Marilyn, and adopting the code name Aphrodite, she assassinated her father and began training in hand to hand combat, as well as how to operate firearms. She joined Quake's team of Secret Warriors and began committing strike assaults on Apocalypse's strong holds.

Aphrodite was later instrumental in setting up the safe haven of New Attilan in Alaska, where a former Hydra base was located. She and Quake later led the cause in shepherding people out of Apocalypse's grasp.

Retrieved from "https://marvelcomicsfanon.fandom.com/wiki/Marilyn_von_Strucker_(Earth-9999)?oldid=246106"
Community content is available under CC-BY-SA unless otherwise noted.