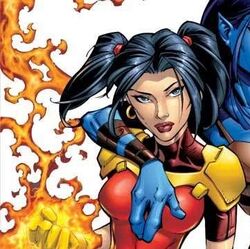 Sorry, I couldn't hear you over the sound of your soon to be burning flesh if you don't give me some real answers!

After her older brother, Shiro, abandoned their family to join the Brotherhood of Mutants, Mariko Yoshida stepped up to run their family’s tech company. However, it wouldn’t be long before her younger brother, Kenji, also developed mutant powers and went off the grid.

Mariko resigned herself to her work, growing bored with life and wishing for anything to bring her some excitement. That excitement came in the form of Wolverine, who arrived in her office beaten and bloody after a confrontation with the Hand. Shocked, Mariko initially believed he was there to kill her, but came to realize he needed her help.

From there, she discovered that Kenji had joined the Hand, and was the one who had hurt Wolverine. Mariko and Wolverine then began working together to track him down and bring him to justice, forming a close bond in the process. Eventually, Kenji was arrested and transported to the American prison the Raft, leaving Wolverine with the choice to either stay with Mariko or return to X-Force.

Wolverine apologized, saying everyone he gets close to gets killed, and he couldn’t do that to Mariko, so he left. She was distraught, but tried to move on. That became hard when she received news of the genocide on Genosha and Shiro’s death. All of her stress boiling to the surface, her latent mutant powers finally emerged and she discovered she has the same pyrokinetic powers as Shiro.

She soon caught the attention of both Magneto and Professor X, who both sought to recruit her. She was forced to run to protect herself, but eventually came face to face with Wolverine, who offered her a spot on X-Force. She was hesitant, but she decided to forgive him and join his team, adopting the name Sunfire to honor her fallen brother.

Retrieved from "https://marvelcomicsfanon.fandom.com/wiki/Mariko_Yoshida_(Earth-101)?oldid=250656"
Community content is available under CC-BY-SA unless otherwise noted.