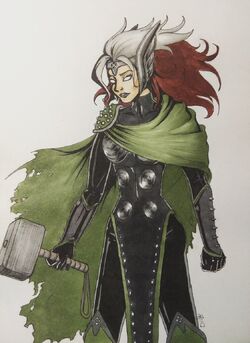 After everything I've done... I don't understand why this damn hammer puts up with me

Marian Carlyle was taken by Apocalypse's forces as a child, and was educated by Mister Sinister. She became one of Apocalypse's most premiere soldiers, and helped in the battle against Captain America and his forces. During the battle, Rogue found herself in battle against Thor, who she ended up absorbing most of his essence out of his body.

Rogue would later abandon Apocalypse's Armada after the X-Man, Mystique taught her compassion and humanity. She eventually found herself in a confrontation with the Avengers, and felt the hammer, Mjolnir, calling out to her. When she claimed it and was imbued with the power of Thor, the Avengers allowed her to keep it.