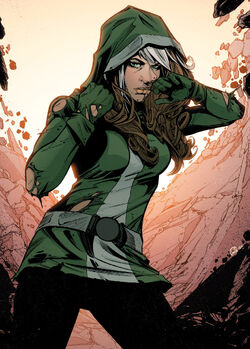 As a baby, Marian's mutant powers manifested and killed her parents by sucking out their entire life force, leaving them nothing but dried out husks. As they lived in a trailer park, it wouldn't be long until everyone else in the vicinity suffered the same fate. Left alone, crying, Marian was eventually found by Destiny and Mystique, who saw the potential of her powers. They were able to take baby Marian and relocate her to a home in Louisiana so that she could never be attached to this crime.

For the next few years, Marian was raised, seemingly as a normal child, but still unable to touch anyone. With Mystique posing as her father who abandons the family before Marian turns 10, she quickly became bitter towards humanity. She went through High School as an outsider, dedicating most of her time to helping her blind mother, Irene. However, before she could graduate, Irene and Marian were approached by Mystique, who revealed the truth of her identity, and explained to Marian that she was a mutant. Initially enraged with the deception, she was manipulated by both of her parents into joining the Brotherhood of Mutants.

Adopting the name Rogue, she came to like being treated like a goddess by her fellow teammates. Even Magneto, the leader of the Brotherhood, had taken a special interest in her. Fighting with the Brotherhood for some time, she went up against the X-Force, and even eventually encountered the superhero Captain Marvel. Convinced by Mystique to use the full extent of her powers, Rogue drains Captain Marvel into a coma, and is overwhelmed by her power. With Carol's thoughts and memories rattling around inside Rogue's mind, she began to reconsider her position.

Now possessing a sense of nobility that had been stifled by Mystique and Destiny long ago, Rogue betrays the Brotherhood. Going on the run, she escaped to Canada where she eventually encountered a man named Logan, who was also a mutant.

The two agreed to work together, and Logan quickly became protective over Rogue. However, it wouldn't be long until they were hunted down by the Brotherhood and attacked by Mystique, Sabretooth, and Sunfire. Rogue believed she would be recaptured and brainwashed, but intervention from the X-Force helped turn the tide of the battle. Rogue and Logan then went with X-Force to Krakoa, and she agreed to join the team to try and make amends for her crimes with the Brotherhood.

Her first attempt would be trying to restore Captain Marvel. Visiting Carol in the S.H.I.E.L.D. hospital, accompanied by Professor Xavier, Rogue made a mental link with her and after much work on the psychic front, helped restore her consciousness into her body. However, a portion of her power still remained in Rogue's body.