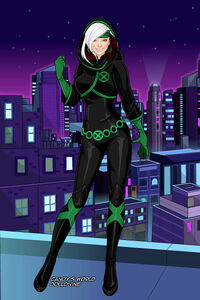 Originally her birth name Marian Carlyle with the ability to absorb the powers of other mutants for a short period of time with a touch. She was a prisoner of Weapon X after her parents left her there after her powers manifest after kissing Cody her 1st boyfriend. Rogue was taken into S.H.I.E.L.D custody. However, she was released by Nick Fury into Professor Xavier's custody and thus joined the X-Men. Rogue began dating Quicksilver. Rogue's skills also depend on who she has recently absorbed. Rogue now retains the powers and the very essence of Wonder Man and can no longer freely touch others with her power.

Power Absorption: Rogue can absorb the powers, energies, memories, knowledge, talents, personality and physical abilities (whether superhuman or not) of another human being (or members of some sentient alien races) through physical contact of her skin with the skin of the other person. She is not limited to absorbing superhuman abilities: for example, she has absorbed the strength, agility, and sharp reflexes of an enhanced human. She can also absorb psionic abilities.

Rogue now retains the powers and the very essence of Wonder Man and can no longer freely touch others with her power.

Ionic Energy Form: The tissue and bones of her entire body have now been augmented in strength and to a certain extent. She is now composed of organic matter that is permeated with this form of energy. Superhuman Strength: Possesses vast superhuman strength, the limits of which aren't known, and she is listed as Class 100. Her strength extends into her legs, as she is capable of superhuman leaps covering several hundred feet. Superhuman Speed: She can run and move at speeds that are beyond the physical limits of the finest human athlete. Superhuman Stamina: Her ion body grants him unlimited stamina and is therefore immune to fatigue. Superhuman Durability: Her bodily tissues are much harder and far more resistant to physical injury than the bodily tissues of a normal human. Rogue is highly resistant to penetration wounds, even from high caliber machine gun shells. She can also withstand tremendous impact forces, such as falling from great heights or being repeatedly struck by superhumanly strong opponents, without being hurt. She is also resistant to extremes in temperature. Superhuman Agility: Her agility, balance, and bodily coordination are all enhanced to levels that are beyond the natural physical limits of even the finest human athlete. Superhuman Reflexes: Rogue reflexes are similarly enhanced and are superior to those of the finest human athlete. Superhuman Hearing: Her hearing has been enhanced to a superhuman degree. Energy Vision: Rogue can see beyond the usual spectrum visible to the human eye. Flight: Rogue is now able to fly through the air at great speeds, the exact limit of which isn't known. She can fly at speeds in excess of 700 mph. Immortality: Rogue is functionally immortal. Because of the ionic energy that empowers her, she no longer ages and is immune to disease and infection. This same energy sustains Rogue's physical vitality far more efficiently than the biochemical process that sustain ordinary human life. As a result, she no longer requires food, water, or oxygen. Ionic Regenerative Healing: Rogue's ionic form can heal itself from gunshot wounds, surgery, and even severed limbs.

Rogue is more of a fighter than her comics and movie counterpart.

She also acts as a big sister to Jubilee.

Retrieved from "https://marvelcomicsfanon.fandom.com/wiki/Marian_Carlyle_(Earth-10010)?oldid=221251"
Community content is available under CC-BY-SA unless otherwise noted.