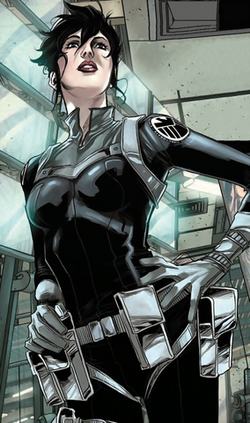 I've had the same car since I was 19, never had a problem. But this thing falls out of the sky every other Thursday.

Ever since she was a teenager, Maria Hill wanted to protect the world from the madness it has found itself in. She enlisted in the army the day she graduated from college, where she studied world politics. After excelling in basic training, she caught the attention of S.H.I.E.L.D.

She was recruited and instantly put through intense training, which she also excelled at. She impressed one of the highest ranking agents, Nick Fury, who recruited her to be his right hand. She had the utmost respect for Fury, but started to doubt his intelligence when he began putting together the Avengers Initiative.

She didn't think it was a good idea to put the safety of the world in the hands of "freaks and vigilantes". However, after they saved New York from the Chitauri invasion, she began to put her trust in them. However, she wanted them regulated and working for S.H.I.E.L.D.

After they left S.H.I.E.L.D. to operate on their own, Hill began putting most of her effort into regulating S.H.I.E.L.D.'S registered superhumans. Since Fury confided in her the news of the Prophecy of Infinity, she has reluctantly began sharing information with the Avengers, and has even formed something resembling a professional relationship with Iron Man and Captain America.

Retrieved from "https://marvelcomicsfanon.fandom.com/wiki/Maria_Hill_(Earth-101)?oldid=250545"
Community content is available under CC-BY-SA unless otherwise noted.