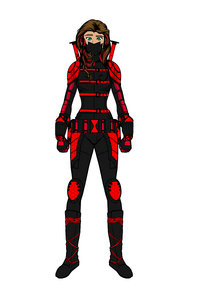 "Can't say I remember gunfights having this much talking."

"...But in my opinion... nothing beats fisticuffs!

Maria (designated BW-04 at the time) was created by a science-based off-shoot of the Red Room made in conjunction with Hydra and Alchemax called the Green Room, which was headed up by scientists Walker Sloane, and Madeline Cho, as well as Jakob Gehlhausen aka Militant. The Green Room Compound was shot up by the paramilitary group, the Taskmasters. She survived but unfortunately didn't check for survivors nor did she check for clues as to who hired the army-for-hire. She tried to live a normal life, but that was cut short when she sensed that Taskmaster Prime had tracked her down and was in her area. She explained this to the couple that had taken her in and they let her run away once again. Eventually, Taskmaster Prime caught up with Maria and they fought in a former Hydra Bunker under the Lincoln Memorial. The very public aftermath allowed SHIELD to intervene, leading to Director Daisy Johnson to introduce her to her "birth mother", Natasha Romanoff.

Retrieved from "https://marvelcomicsfanon.fandom.com/wiki/Maria_Cruz_(Earth-11213)?oldid=265743"
Community content is available under CC-BY-SA unless otherwise noted.