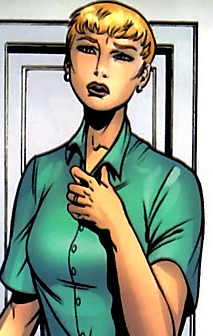 Peggy Rae Burdick is the ex-girlfriend of Scott Lang. Together they had a daughter Cassie. When Cassie became sick Scott stole the Ant-Man's Suit, to help steal to save his daughters life.

Peggy remarried, she and her new husband, Blake Burdick, continued to harbor a growing resentment towards superhuman heroes and worry for Cassie's safety. Peggy was able to obtain a court ruling limiting Scott's time with Cassie to supervised visits.

Retrieved from "https://marvelcomicsfanon.fandom.com/wiki/Margaret_Rae_(Earth-1010)?oldid=165268"
Community content is available under CC-BY-SA unless otherwise noted.