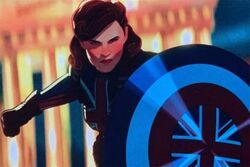 Oh, please. It's not like America trademarked the concept of the shield.

Peggy Carter is the illegitimate daughter of the Red Skull's clone, Albert Schmidt. Raised in secret by her mother to become the antithesis of everything Hydra stands for, Peggy enlisted in the army the second she was old enough.

When she discovered the British faction of S.H.I.E.L.D. was running tests on recreations of the Super-Soldier Serum, she was the first person to sign up. She had always admired the story of Captain America and wished to be like him. By some miracle, the Serum worked. However, word had spread to Hydra that the Red Skull's granddaughter was undergoing the procedure, and the Winter Soldier was sent to sabotage it.

However, it was only after the process was complete that he was able to kill the scientists behind it and destroy the Rebirth Chamber. Peggy took this as her first mission and hunted down the Winter Soldier to engage him in battle. They both tried their hardest to kill the other before the battle was interrupted by Nick Fury and Captain America, which provided the Winter Soldier cover for an escape.

Peggy would later be dubbed Captain Britain and provided with her own Vibranium shield. Slightly annoyed with S.H.I.E.L.D. and the Avengers, she opted to operate on her own and was later recruited by the British crown to lead the team Excalibur. It was there that she met her fellow British hero, the Black Knight. After working together for some time, the two formed a relationship, despite not truly being in love. In fact, Peggy came to find herself attracted to Captain America the more they worked together.

[[Category: In a Relationship with Dane Whitman Characters]]