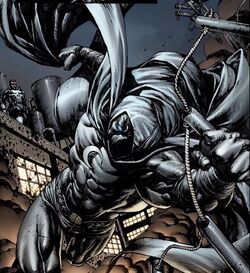 I'm not a moon knight. I'm a moon soldier. A moon tool. I'm not sure I want to be the moon's b*tch anymore.

Moon Knight's history is exactly the same as that of Earth-616's Marc Spector up until the Marvel NEW! relaunch.

Moon Knight was quickly adopted into the Secret Avengers without much resistance. But he would begin going into periods where he would enter an intense rage followed by power boosts. It was soon seen that he was becoming wholly possessed by Khonshu and gaining all of his powers. It later appeared that he sacrificed his powers to live a normal life. But he has been seen displaying some of Khonshu's powers, indicating he may never be free.

Spector has no powers during the day. At night, he gains the following abilities:

Spector has telepathic resistance due to his many personalities. He's also a skilled detective, martial artist, weapons expert, and marksman.

Retrieved from "https://marvelcomicsfanon.fandom.com/wiki/Marcus_Spector_(Marvel_NEW!)?oldid=163701"
Community content is available under CC-BY-SA unless otherwise noted.