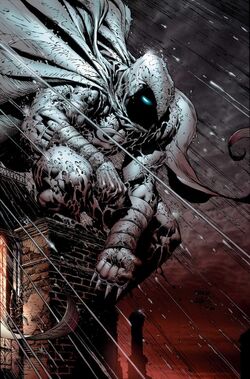 Brown
Unusual Features
Scar over his left eye; twice he was confined to a wheelchair
Status
Citizenship

I am Moon Knight... The bearer of the mantle of Khonshu, Khonshu the justice bringer. I am vengeance of the night...

Born in Chicago, Illinois, Marcus "Marc" Spector was the rebellious son of a studious Jewish rabbi whose family had fled Europe in the 1930s to escape the Holocaust. His mother died soon afterward. Marc refused to follow his father's calling; he could not understand why Elias never fought back against persecution. Instead he became a prize-fighting boxer, but when his father got into the ring one night to stop him, Marc accidentally punched him out of frustration. Realizing for what he has done, he immediately apologizes to his father, but his father left otherwise, ignoring his apology. After that, he immediately went into his home, but his father wasn't there. Instead he found and read a note from his father, saying that he was supposed to say goodbye because he was leaving for a mission after joining the U.S. Marines in the war and apologized for his past doings and told him to take care of his brother, Randall and that he will always love him and his family, whatever happens. After reading note, he and his brother breaks down in tears for what his father has done. He never saw or have heard of his father ever since.

A few years later, Marc eventually decided to follow his father's footsteps by enlisting in the Marines. After two tours of duty, he became a field agent of the CIA. There he worked with several people who would later interact with Moon Knight, including William Cross, Amos Lardner, Marianne "Mary" Sands, Lisa Shaw (who was his girlfriend at the time), and his own brother, Randall Spector, who became secretly mental and psychotic the whole time after getting traumatized from his childhood with his brother. Randall killed Spector's girlfriend Elisa by mercilessly shooting her to keep her from exposing a gun-running scheme; Spector retaliated with a grenade and assumed Randall was dead. Elisa's death was another major factor in Marc's life that made him to start developing split personalities as time goes by.

After the following traumatic events, he eventually left the CIA after experiencing several cases of disillusionment caused by his personal tragedies. Spector then became a mercenary-for-hire. During this period he befriended Jean-Paul "Frenchie" Duchamp, who became his professional partner. They took on several assignments, mainly in Africa and South America. While working for the terrorist Raoul Bushman as an undercover agent, Marc became increasingly disturbed by Bushman's savagery and ruthlessness. For the first time in his life, his conscience had awakened and it troubled him deeply. Then in Selima, Sudan, they stumbled across archaeologist Dr. Peter Alraune's excavation of an Egyptian Pharaoh's tomb. Believing there was gold and riches within, Bushman mercilessly murdered Alraune to plunder the tomb. Sickened by Bushman, Marc tried to do the decent thing and helped Alraune's loyal personal assistant, Mary Sands and his other fellowmen escape the area using Raoul's helicopter, away from Raoul's attentions. Annoyed with Marc's betrayal, Bushman fought and brutally beat Spector, abandoning him and Mary in the desert so that he would suffer before he would be left to die.

Barely conscious and struggling for his life, Spector staggered to the ancient tomb for shelter. He was barely breathing and was already starting to accept his fate to die in the vast and dry desert until three strangers have arrived at the scene and found the two, lying in the sandy surface. The three men brought Marc and Mary to rest inside a sacred temple, near a statue of the "moon god" they worship named Khonshu. Weakened from his fight with Bushman and the elements of the desert, Marc seemingly died from his injuries. The three men then carried his body into a room and lied him down to a reclined surface near the statue of Khonshu, and let him be treated with several traditional healing methods that Mary barely understood making her extremely confused to what they are doing to him. The strange men had injected Marc with a mysterious herbal serum that miraculously revived Marc's consciousness, but not his physical body. This process however, had woken his consciousness up inside a spiritual realm inside his mind, where he had met the avatar of Khonshu, for the very first time in a new chance in his life, something that Marc had never expected to live.

Rise of the Moon Knight

Upon Marc's first encounter with the Egyptian warrior's spirit, the latter had sincerely asked him whether he wanted to avenge both the deaths of the people who were killed due to his failure in saving them, and to get revenge on those who continuously harms his living friends and loved ones in exchange for an unspeakable ancient power that he would be possessing. Marc honestly accepted Khonsou's offer, to which he then suddenly wakes up into his physical own body, once again, giving him another chance to live. Finally having found a purpose in life since the tragic incident, Spector applied himself fully. He, with the help of his old pal Frenchie, had moved to New York, taking the idol along. With attempted recovery to cope with trauma, the combined efforts of his multiple personalities had unknowingly developed a highly-advanced combat suit, equipment, and eventually, the previous heroic persona of Khonsou during his years as a honored warrior, the legendary Moon Knight.

Ever since the fallout of Khonshu's possession had subsequently saved his life, Marc, Mary, and Frenchie were eventually rescued by his former CIA teammates, and returned to New York and live normal life there in peace and tranquility with Mary, for he was no longer certain that he would never want to fulfill the will of Khonsu and become the Moon Knight. However, both the unstoppable outcries of his multiple personas caused by the psychological and supernatural nightmares induced by Khonshu's spirit, and the eventual return of his old enemy Bushman who decided to briefly but devastatingly plague the streets of New York City through violence and connections had prompted Marc to officially don the sacred suit as the Modern Fist of Khonshu and begin his pursuit of vengeance and justice across the wide city that never sleeps, starting with tracking down and hunting Bushman once more.

By that significant moment, only Marc's waking nightmares had slowly stopped, lately but truly realizing the reason behind the terrifying visions he has been dreaming every night, which was the consequences of his failures and responsibilities to comply the will of Khonshu himself. At some point in his life, Moon Knight had few several encounters and alliances with the other vigilantes and heroes across New York City, such as the Daredevil, Black Cat, Spider-Man, Power Man, Iron Fist, and Jewel. They later decided to form a single alliance, a team perhaps, in order to keep the streets of New York safe and sound from the clutches of crime and evil. From time to time, they were eventually dubbed as the Defenders both by themselves and their growing admirers, by those who have seen them take on various criminal activities in action.

By The Hand's Palm

Throughout the entire journeys of the Defenders, the heroic team has never face a stronger and a more villainous organization in the world (besides the Kingpin's entire Criminal Empire) than the powerful palm of the fingers of the Hand, upon their devastating re-emergence, as the five fingers had rise up throughout New York City, in order to tried to catch the Iron Fist so he would open the gates for the substance, the Hand's long-time elixir of immortality. Due to this, the Defenders were reformed in order to save Iron Fist and stop the Hand from destroying the majority of the city in the process.

However, in the midst of their battle against the Hand, Marc was greatly knocked down by one of the Hand's fingers, whose might and skills rivals his, who temporarily captured him and had his mind under their will by manipulating most of his split personalities, forcing Marc to turn against his own teammates during the climax of the mission against the Hand. Marc was only then snapped from his state of coercion after a brutal brawl mainly with his fellow defender Black Cat, who successfully have gotten rid of his coercive state after getting the chance to punch him so hard, it threw him into a brick wall of a building, in which his head hit the hard wall, temporarily rendering him unconscious for almost a minute before coming back into his senses and reuniting with his team.

As the fingers of the Hand had reached for the substance deep underground, trying to collect all of the remaining samples of the substance have only to lead them to their doom, when the now reformed Defenders buried the rest of the leaders under the ground, leaving their fates unknown in the meantime. The fingers might have been defeated by the heroes for now, but later on, the Hand's survival would be proven, as the organization itself continues to thrive and survive, even without their strongest "fingers" (leaders), who would still return, later on.

Elixir of Khonshu: As a testament to the human brain, Moon Knight's state of mind has always caused his powers and abilities from Khonshu to come into question, as he himself, at times, is not a reliable source. It's been stated that he may suffer from a madness so powerful it can only be describe as magic, although it was later revealed to be a mysterious and strange serum similar to the Heart-Shaped Herb of the Black Panther, created by some kind of ancient alchemy. This was revealed to be the source of all Khonsou's and other non-mutant Egyptian warriors' powers during the Egyptian times when he was still around as idolized by many as a "moon god," before he and his fellow warriors were eventually killed in an attempt to take down Apocalypse and his reign of terror, but miserably failed due to Apocalypse's extraordinary powers with the help of his Four Horsemen.

Split Personalities: As a consequence of having become Khonshu's avatar, Marc has developed several personalities throughout his life, most notably Jake Lockley, Steven Grant, and his alter-ego, the Moon Knight (Khonshu's avatar).

Retrieved from "https://marvelcomicsfanon.fandom.com/wiki/Marcus_Spector_(Earth-61615)?oldid=265182"
Community content is available under CC-BY-SA unless otherwise noted.