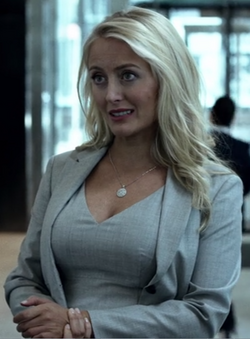 Working for Landman and Zack

We're doing the city a favour by trying to renovate."
"You know that's not true!"
"Yeh, because the laws always about the truth.

When long serving interns Foggy Nelson and Matt Murdock turned down a job offer from Landman and Zack, Stahl saw the opportunity and took the job.

Stahl was ordered to greet Foggy Nelson, who had since set up with own independent law firm with Matt Murdock named Nelson and Murdock and was now representing a woman named Elena Cardenas, who was suing one of Landman and Zack's clients Armand Tully over damage to her home. She met him and Karen Page and explained she had taken his job and was representing Tully. Stahl argued that the workman had not acted illegally and had left because they feared for their safety as the building was filled with drug-dealers and they had offered Mrs. Cardenas a pay-off to leave. Nelson argued back that Tully was acting illegally and could not force Cardenas out and promised he would see her in court before telling her she did not have a soul.

Later, Nelson spoke to Stahl and learned that Tully was "on an island without a name for the unforeseen future".

Okay but can you do it with your indoor voice without speaking?"
"That's a very asshole thing to say. I'm impressed.

Stahl met with Foggy Nelson a few nights later and they ended up having sex in her apartment. While Stahl prepared to go to work the next morning, she used her favourite nickname for Nelson, "Foggy Bear", which led to Nelson insulting her. When she asked if he was planning on going to work, he revealed that he may never go back to work with Matt Murdock again. Stahl told him she did not care for his drama and left for work, telling him to lock the door when he left.

You're asking me to commit career suicide."
"I'm asking you to trust me. One way or another Fisk, Owlsley, anyone connected with what they've been doing they're going to get what's coming to them and there's going to be some hard questions about how much Landman and Zack knew and when they knew it. This is your chance to get in front of that, take your soul back.

Foggy Nelson asked to meet Stahl at Josie's Bar. While she waited, she ordered a Vodka Martini from Josie but only got a glass of vodka. When Nelson arrived, he informed her that he needed her help, much to Stahl's disappointment as she was hoping they would have sex again. Nelson revealed that Elena Cardenas' case was bigger than they expected and they had learned that many other similar cases were being organized by Wilson Fisk. Stahl tried to leave as Landman and Zack represented Fisk, but Nelson convinced her to read his case file.

Stahl became transfixed by Nelson's papers and saw the corruption that Fisk was involved with. Nelson revealed much of the information they had gained from Daredevil; they debated if Daredevil or Fisk were responsible for the Bombing of Hell's Kitchen. Nelson tried to convince her of Fisk's guilt but Stahl argued that Fisk was one of their most valuable clients and she could lose her job just speaking to him. Nelson however convinced her that no matter what, Fisk was going down, and this was her chance to save herself from corruption charges. She agreed to help and began sending Nelson documents from Landman and Zack to help with their investigation.

Thanks largely to Stahl's help, Nelson and Murdock were able to take on Carl Hoffman as a client and he revealed Wilson Fisk's entire organization, resulting in the arrests of everyone connected to his criminal empire. As Stahl arrived at her work, she witnessed her employer Parish Landman being arrested by the FBI for his part in Fisk's organisation. As she watched him being taken away, Stahl sat in her car and smiled to herself, knowing that she had helped bring down a powerful criminal empire.

That's disappointing; I thought this was a booty call.

"Outspoken" is an adjective that does not do Marci Stahl justice. She speaks exactly how she feels and cares little about how it is received.

This brutal honest is actually a good character trait; when Foggy Nelson learned that his best friend for years, Matt Murdock, was habitually lying to him, Nelson went to Stahl for comfort.

Though Stahl is blunt and usually says what she feels, she hides that she truly cares for Nelson. When she saw him approaching Josie's Bar to meet her, Stahl's face lit up and she checked her appearance; something that was unnecessary if it was only a "booty call" as she claimed.

Stahl knows that she can be callous to others, but she is also respectful; after the death of Elena Cardenas, Stahl no longer mispronounced her name.

Retrieved from "https://marvelcomicsfanon.fandom.com/wiki/Marci_Stahl_(Earth-1010)?oldid=189517"
Community content is available under CC-BY-SA unless otherwise noted.