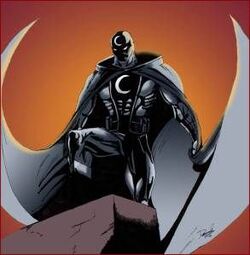 Earth-646466
Base Of Operations
The Outside
Characteristics
Gender

Marc Spector is a former CIA Operative who went insane and his mind fractured following the brutal murder of his wife, Marlene. Creating the personality of Steven Grant, a private investigator, he tracked down the information on her killers. His mind then fractured once more when faced with the truth, and he became the brutal vigilante called Moon Knight.

He would eventually be recruited into the Renegades by The Outsider, under the promise that if he returned to his home reality, another personality would emerge and align himself with the same men who killed his wife. Repulsed by this possibility, Moon Knight becomes a Renegade.

He would go on a few missions with the team before finding himself in a reality where the Asgardians were attempting to conquer Earth, and Moon Knight would fall in battle against the God of Mischief, Loki.

Retrieved from "https://marvelcomicsfanon.fandom.com/wiki/Marc_Spector_(Earth-646466)?oldid=244563"
Community content is available under CC-BY-SA unless otherwise noted.