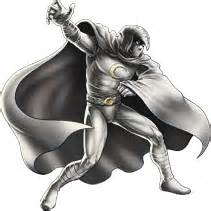 Marc Spector is fanatically loyal to the Egyptian moon god, Khonshu, whom he believes gave him the powers he uses to fight crime as the Moon Knight.

When Doctor Doom formed the Masters of Evil, he joined Nick Fury's new team of super heroes, the Ultimate Alliance.

Over the course of his life as a boxer, U.S. Marine, mercenary, and costumed superhero, Marc Spector has become an expert at hand-to-hand combat techniques and various martial arts. He is an Olympic-level athlete and a skilled acrobat and gymnast, and excels as a combat strategist.

Retrieved from "https://marvelcomicsfanon.fandom.com/wiki/Marc_Spector_(Earth-6109.2)?oldid=128747"
Community content is available under CC-BY-SA unless otherwise noted.