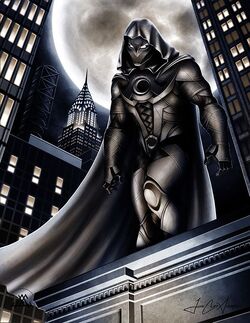 You think the darkness is your ally? I was born in the darkness. Molded by it. I didn't see the light until I was already a man, and by then it nothing but blinding!

Marc Spector was the son of a Rabbi, and grew up in Chicago. He never quite understood why his father never stood up to persecution, which led him to always fight back against it. He would take many beatings by the time he became an adult, and eventually discovered that his father's best friend was actually a Nazi deserter and a serial killer of Jews. Marc was too late to save his parents from the slaughter, but was able to avenge them by killing him. Marc then became the heir to quite a large fortune, including his family's estate in New York City. However, he had no interest in money, and decided to run away from his life by enlisting in the Navy.

He quickly rose up in training and became a talented Navy SEAL, traveling the world to perform black ops missions. He eventually went awol and began acting as a mercenary, using multiple different aliases as he was constantly relocating. During his time in France, he unknowingly sired a daughter, who was named Diatrice and raised without him.

Marc would eventually discover a secret temple in Egypt dedicated to a moon God named Khonshu from a dead religion. Marc discovered that a squad of Hydra agents were attempting to steal it, so he fought them all off, killing every single one, but not before he took a bullet directly in his heart. As he lay bleeding out, the spirit of Khonshu reached out to him and revived Marc's spirit, revitalizing his body so that he would become a peak human.

Inspired by his brush with death, Marc returned home to Spector Mansion where he began amassing resources to become a vigilante. He felt the spirit of Khonshu operating through his physical form, leading him to embrace his virtuous nature to save lives from enduring the same horrors he has.

Since becoming Moon Knight, Marc's various aliases from his past as a mercenary have begun to manifest themselves as alternate personalities. Even the Moon Knight himself has a separate psyche from Spector. Feeling at a loss, he decided to embrace his alternate self and allowed each one an allotted amount of time to live as and express themselves, ending each night as the Fist of Khonshu, exacting justice upon the evildoers of the world.

Retrieved from "https://marvelcomicsfanon.fandom.com/wiki/Marc_Spector_(Earth-101)?oldid=250131"
Community content is available under CC-BY-SA unless otherwise noted.