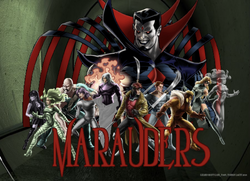 The Marauders began as a group of super-powered mercenaries working on behalf of the interests of the villain Mister Sinister. Sinister had long devoted his life to the study of genetics and mutations in particular. Knowing of the existence of an underground community called the Morlocks, Sinister decided that their existence was compromising and diluting the mutant gene pool. To remedy this, he made Gambit, a thief who owed Sinister a favor for restoring balance to his formative mutant powers, form a group of mercenaries into a team of Marauders that would work for him.

The majority of the Marauders trailed the Morlock Tommy. After repaying Tommy for her leading them there by killing her, the Marauders began a systematic massacre of the population of the Morlocks.

Unaware of the Marauders' true intent, Gambit tried to stop them but was attacked by Sabretooth. He was only able to save a Morlock girl before escaping. The Marauders were confronted by the Morlocks' allies, the mutant hero team the X-Men.