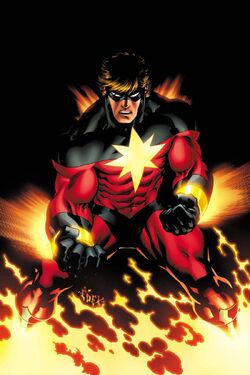 Married
Occupation
Member of the Avengers (currently)
Executive Director of Stark Enterprises (currently)
Education
University of Massachusetts (graduated)
Origin
Origin
A Human/Kree hybrid, Mar-Vell discovered his Kree heritage when his powers began to surface when he was in high school and his adoptive father gives him a pair of Nega Bands that keeps his powers stable and allows him to transform into his hero identity.
Place of Birth
Charlemagne, Québec, Canada
Creators

Maverick Mar-Vell Guillaumont is the son of Jo-Zhonn, a Kree from the Kree Empire and Céline Guillaumont, a beautiful Canadian woman from Charlemagne, a suburb located in Montreal, Quebec, Canada. The two weren't married at the time of Mar-Vell's birth but have planned to tie the knot. Unfortunately for Jo-Zhonn, Céline passes away after conceiving Mar-Vell, leaving him to raise him on his own. But by the time Mar-Vell was 5 years old, his father got involved with the Kree Empire who had become corrupt, forcing him to battle against them as they plan to attack the Earth after the Skrull-Kree War, leading to his death. Before dying, Jo-Zhonn reached out to a longtime friend named John Arrowkeeper who was visiting Montreal, getting involved in the crossfire and tells him to take care of Mar-Vell and gives him a pair of golden Nega-Bands before taking his last breath.

After the Kree Empire's defeat leading to his father's tragic passing, Mar-Vell was adopted by John and moves to Toronto, Ontario where he spent most of his childhood years in Baldwin Village where John runs a small coffeehouse and antique shop in which he works sometimes when he's not in school.

Awakening of His Powers

When Mar-Vell reached high school, his powers began to surface, starting with his body began glowing in a bright golden aura while he was eating lunch outside. Most of the students looked at Mar-Vell and some were amazed and confused while the others brushed it off, thinking that it was just glare from the sun. However, everything began to change when Mar-Vell got involved in bullying where he got picked on due to the glow that happened. He ended up shooting a great beam of stellar energy at the bullies which nearly damaged the hallways of the school, leaving Mar-Vell shocked and horrified. He hurries back home where he tells John about what was happening to him. When he showed him his new abilities, John revealed to Mar-Vell that he was studying the life of the Kree race and tells Mar-Vell that he was born half-Kree and that he knows his father before his birth. He revealed to him that people who were born half-Human/half-Kree begin to develop their powers when they are in their early or teenage years and they can become very unstable while the full-blooded Kree are able to control their power.

This brought shock within Mar-Vell and feared that people would fear him due to his newly-surfaced powers, but his fear weakened when John tells him that his father had always dreamed of seeing him protecting the Earth from any threat that wants to destroy the planet and wanting to take him to the planet of Kree-Lar to become more connected to his Kree heritage before the Kree's leaders' corruption. After Mar-Vell was suspended for the school fight, John presents him the Nega Bands and tells him that they will keep his powers stable after doing research on them. Mar-Vell, at first didn't want to live his life with the powers he had, wanting to be a normal person but began to rethink his feelings as he began to practice on his powers, and even gaining new abilities as well such as super strength, speed, and flight.

The Birth of Captain Marvel

After graduating high school, Mar-Vell moves to Boston, Massachusetts, USA to attend college at the University of Massachusetts, pursuing a Bachelor's Degree in Business. With the Nega Bands, Mar-Vell's powers were kept in its normal stability, however, they began to glow and it brought him to his attention. He didn't know why they were glowing until the college was attacked by a group of shapeshifting aliens called the Skrulls who were victims of the genocide of their race and plotted to wipe out the human race of the Earth. Many innocent lives have been taken while the Skrull loomed over the city of Boston and Mar-Vell was left horrified when he saw the Skrulls commit genocide and he feel the glow of his Nega Bands get stronger. Swallowing his hesitation, Mar-Vell took it upon himself to protect the college from the ravaging Skrulls who attacked him once he inflicted his stellar-based attacks on one of their soldiers. He even took the time to get most of the people into safety. As the attack gets worse, Mar-Vell began to feel his Nega Bands emit a stronger light, almost as if they were telling him something, something he couldn't understand.

As the Skrulls were about to make their next attack on him, Mar-Vell gazed at the aliens and he crossed his wrists, slamming both of his Nega-Bands together. In a blinding light, Mar-Vell was donned in a red and black suit with a glowing yellow eight-pointed star in the center. It wasn't until after he changed when he realized that the Nega-Bands had given him a different form and it boosted up his confidence. With his newer form, Mar-Vell became more powerful and very agile, fighting every single Skrull. Shocked by how much stronger Mar-Vell had become, most of the Skrulls began to fall back as the half-Kree subdued the whole Skrull army. Mar-Vell soon confronts the leader of the Skrulls, who tells him that his kind had destroyed their planet called Skrullos and their race was on the brink of extinction. Mar-Vell advises the Skrull that destroying the human race wasn't the best way in seeking a planet to expand their kind and he shows deep condolences to the Skrulls for the loss of their planet under the hands of the Kree. He orders the lead Skrull to have the soldiers leave Earth and find a planet with no life and live peacefully there.

Once the Skrulls leave the Earth, Mar-Vell could feel his whole body shaking, realizing that he had saved the entire Earth and all of the people. Since that day, Mar-Vell was given new inspiration, something that John has told him about Jo-Zhonn who had fought the Kree Empire who tried to attack the Earth and died protecting the people around him. The Earth was very vulnerable to any attacks from parts of the galaxy and he decided to follow in his father's footsteps despite not getting to know him more. As his new life as a hero began to surface, Mar-Vell continued to protect the Earth from other aliens that attacked and began to gain recognition from the public. At the time, Mar-Vell kept his identity a secret and when people ask him who he was, Mar-Vell names himself Captain Marvel.

Mar-Vell soon graduates college and began to take a job at Stark Enterprises ran by Tony Stark who was impressed by his work and makes him the executive director of his company. But it wasn't until when Mar-Vell was seen fighting Yon-Rogg, a corrupted Kree as Marvel and Tony was left amazed by how great his power was and offered him to join the Avengers with him along with Captain America and Falcon.

During his involvement with the Avengers, Mar-Vell meets Daily Bugle journalist, Randy Robertson while fighting and saves him from getting hurt. Mar-Vell eventually fell in love with Randy and the two hit it off. Eventually, Mar-Vell proposes to Randy and the two married after 4 years of dating. He eventually moves in with the journalist who continues to support him with his career as an Avenger.

Transportation: None
Weapons: None

Retrieved from "https://marvelcomicsfanon.fandom.com/wiki/Mar-Vell_(Earth-7090)?oldid=274029"
Community content is available under CC-BY-SA unless otherwise noted.