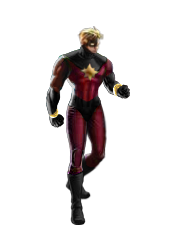 Earth-1010
Base Of Operations
Mobile throughout the universe
Characteristics
Gender

Captain Mar-Vell was a member of the Kree, the alien humanoid race which built an empire throughout the galaxy known as the Greater Magellanic Cloud. More specifically, he was one of the so-called "White Kree," a Kree race with the same color skin as Caucasian Earth humans, which was the result of interbreeding of many of the original blue Kree race with humanoids of other worlds, and which came to far outnumbers the blue Kree, who, however, still dominated positions of wealth and governmental power in the Kree Empire.

The Earth-born Fantastic Four's defeats of the Kree Sentry 459 and of Ronan the Accuser drew the Supreme Intelligence's attention to Earth. Thousands of years before, the Kree had learned of the genetic potential of Earth's human beings for evolving superhuman abilities, and had even conducted genetic experiments on Earth which had resulted in the evolution of the Inhumans. Now, the Supreme Intelligence realized, super-humans such as the Fantastic Four were evolving on Earth spontaneously, and Earth human beings had the potential of evolving even nearly limitless psionic powers.

Other factors entered into the Supreme Intelligence's calculations. It had telepathically become aware that the Kree Imperial Minister, Zarek, and Ronan were plotting its overthrow. After Ronan's defeat on Earth, the Supreme Intelligence had ordered that a Kree starship put the planet under observation. Zarek and Ronan planned to arrange for a Kree hero to be assigned to the mission, and to manipulate events so that he would then turn traitor. They would then frame him for creating a menace to the planet Kree-Lar, administrative center of the Kree Empire. Ronan would then kill the supposed traitor, halting the menace. The Supreme Intelligence would be blamed for the near disaster, and Zarek and Ronan would supplant it as ruler of the Empire. The Supreme Intelligence intended to thwart this conspiracy, but also to make the Kree pawn that the plotters selected be the one whom he would link to the Earth human being.

The Supreme Intelligence searched for the white Kree who best fit these many requirements, and found him in Captain Mar-Vell, who was, despite his youth, an acclaimed hero in the Empire for his victories in battle with the Skrulls and others. The Supreme Intelligence knew that Mar-Vell and his lover Una, a nurse in the space fleet, both possessed humane attitudes and sympathies, which had been suppressed in most other Kree in their education. Moreover, the Supreme Intelligence learned that a Commander Yon-Rogg lusted after Una, and was ruthless enough to use any means of disposing of his rival for her love. Through secret use of its telepathic powers, the Supreme Intelligence arranged for Zarek and Ronan to learn of all this. The two conspirators then named Mar-Vell to be the Kree spy on Earth, Yon-Rogg to be his commander, and Una to be a nurse on their starship.

After arriving on Earth, Mar-Vell witnessed the death of Dr. Walter Lawson, a scientist on his way to his new assignment at Cape Canaveral, Florida, in an auto accident. Coincidentally, Lawson bore an astonishing resemblance to Mar-Vell, so the latter decided to pose as him, the better to study Earth humans' progress towards developing means of space travel. As Lawson, Mar-Vell met Cape security chief Carol Danvers. Meanwhile, Kree Sentry #459, which the Fantastic Four had defeated, had been brought to the Cape for study, and Yon-Rogg, hoping that it would destroy Mar-Vell, re-activated it from his starship without the Captain being aware of who activated it. Mar-Vell publicly appeared in his Kree helmet and uniform to battle the Sentry, and succeeded in defeating it. During this battle, she was irradiated by a Kree Psyche-magnetron, causing her to develop a half-Kree physiology which was similar to Mar-Vell's; using the superhuman powers she gained. Danvers later became the first costumed adventurer known as Ms. Marvel. Onlookers, hearing the Sentry call him by name, believed him to be a new Earth-born superhuman adventurer named "Captain Marvel" and acclaimed him as a hero.

Originally, Captain Marvel had no superhuman powers. However, the Kree had evolved with greater strength than Earth humans in order to combat the heavier gravity of their homeworlds.

Dr. Benjamin Savannah's radiation treatment have altered Mar-Vell's genetic structure so that he could absorb solar energy and convert it for various uses. He then relied on the solar power rather than the Nega-Bands for flight, and would leave a glowing trail behind him.

Solar Energy Metabolics: ability to metabolize solar energy and convert it for a variety of uses including converting the light of the sun and stars and to a variety of different forms of light and energy.

Manipulation and absorption of radiation

Superhuman Strength:Super Strength Kree are naturally able to lift 2-3 tons under optimal conditions. However, Captain Marvel's base strength is 15 tons. This ability increased more with the amount of solar energy he has absorbed. The max amount he was theorized as being capable of lifting is 75-100 tons for a short period of time. In saying this no true limit was ever made clear.

Superhuman Durability:While never stated as an official capability Captain Marvel has taken incredible blows from powerful heroes and villains alike. Being capable of standing toe to toe with Thanos it can be assumed that Captain Marvel has a degree of durability above that of a normal man. This durability also extends itself to being capable of surviving in the vacuum of space for an indefinite amount of time.

Superhuman Agility:Mar-vell agility, balance, and body coordination are enhanced to levels that are beyond the natural physical limits of the finest human athlete.

Superhuman Reflexes: Mar-vell reflexes are beyond those of the finest human athlete,which makes it possible for him to dodge gunfire even in point blank range from multiple gunners at the same time.

Minor Molecular Control: He can use absorbed energy to transform his regular clothing into his costume and vice-versa.

Energy Absorption(Thanks to the Nega-Bands)

Cosmic Awareness: Arguably Captain Marvel's most impressive power is his Cosmic Awareness. This ability allows him to know exactly what he feels he needs to know at any given moment. This could range from what his current location is to discovering an opponents weakness. This power alone made Captain Marvel a force to be reckoned with.

Kree Physiology: The natural attributes of the Kree race ; resistance to Poison, toxins and disease (Systemic Antidote), and a higher natural Strength and Body than a human.

Extensive knowledge of the technologically advanced vehicles and devices of the Kree Empire; Captain Marvel was consider the best solider and warrior in the Kree Army. Being highly trained and capable hand-to-hand combatant and tactician he was often compared to the likes of Captain America in terms of ability. Being from a highly advance alien civilization Captain Marvel also had extensive knowledge in highly advance Kree technology. Due to Mar-Vell's upbringing in an advance alien culture is intelligence is superior to that of humans. Mar-Vell was capable of matching the most advance thinkers in the marvel universe as they made great calculations in seconds. On top of that Mar-Vell is skilled in the filed of mathematics, robotics, and mechanics.

Originally Captain Marvel possessed the normal level of strength for a Kree of his age, height, and build who engaged in intensive regular exercise. Under Earth's gravity he could lift (press) 1000 pounds. The Kree Nega-Bands enabled Mar-Vell to convert his psionic energy into physical strength, so that he could then lift (press) 10 tons. After Dr. Benjamin Savannah's radiation treatments, Mar-Vell could lift (press) 15 tons while wearing the Nega-Bands.

Equipment: Nega-Bands: They use energies of the Negative Zone and the wielder's own energies. Are capable of interstellar flight. Becomes resistant to many attacks and the vacuum of space as well as no longer requiring food, water, air or sleep, the bands however are incapable of distinguishing water from a proper atmosphere, therefore a wielder of the Nega-Bands could still drown despite being protected from the vacuum of space. Are also granted super-human strength. The bands have considerable ability to manipulate, absorb and project various types of energy, except mystic energies, but to a lesser extent than that of the Quantum Bands.

Retrieved from "https://marvelcomicsfanon.fandom.com/wiki/Mar-Vell_(Earth-1010)?oldid=173161"
Community content is available under CC-BY-SA unless otherwise noted.