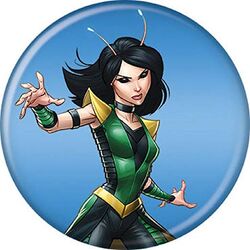 I have never met anyone who feels, and loves as deeply as you do.

Mantis is a member of the insect-like species that developed on Hala around the same time as the Kree, who developed a supremacy complex over the Insectivorids. Mantis was born with the ability to access other beings's feelings through physical touch. Her people saw her as a shaman before they were hunted to endangerment by the Kree.

Mantis later became wrapped up in the Guardians of the Galaxy, who gave her a new family.

Retrieved from "https://marvelcomicsfanon.fandom.com/wiki/Mantis_(Earth-9999)?oldid=246224"
Community content is available under CC-BY-SA unless otherwise noted.