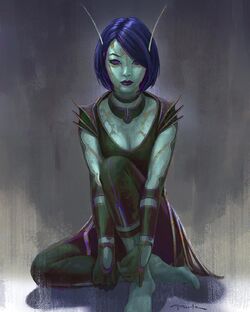 The Chick with the Antennae
Identity

Every time I look at you, I feel the pain of all you have ever hurt. I tolerate your place on this ship, because Quill says it is necessary, but make no mistake, I hate you, Thanos. So do not ever tell me to smile in your presence again.

Mantis was once a slave in the Spartax space system before she was freed by the Guardians of the Galaxy, who became her new family. She enjoyed the life of a hero, but soon came to understand that it meant losing everyone you loved.

The Order of the World Tree's besieging of the entire universe resulted in the deaths of several Guardians, including Gamora, Drax, and Groot. Mantis remained by Star-Lord's side even when Rocket abandoned them.

Retrieved from "https://marvelcomicsfanon.fandom.com/wiki/Mantis_(Earth-2001)?oldid=261588"
Community content is available under CC-BY-SA unless otherwise noted.