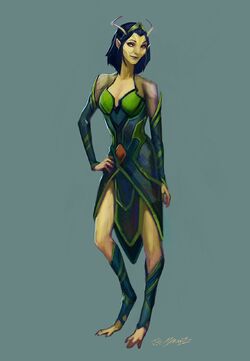 The Chick with the Antennae
Identity

I've never felt such anguish and compassion all in one place... how do you go on day after day?

The Insectivorids hail from the planet Kaliklak, which was integrated into the Shi'ar Empire during its primitive days. The Insectivorid named Mantis was born thousands of years after this, and was destined to work as a servant for the Royal Family. When she reached maturity, she became the assistant to Majestor J'Son.

Eventually, J'Son's son, Peter, was discovered and ushered into the Empire. Mantis was assigned to protect him and help make the transition easier. However, Peter helped Mantis realize how oppressive the Empire, and specifically, J'Son, really was.

When the Guardians of the Galaxy came to liberate Star-Lord, Mantis made an in the moment decision to abandon her role at J'Son's side and go with them. She went on to find a new family with the Guardians, and finally felt like she'd found a purpose to use her powers for; to Guard the Galaxy.

Retrieved from "https://marvelcomicsfanon.fandom.com/wiki/Mantis_(Earth-101)?oldid=247846"
Community content is available under CC-BY-SA unless otherwise noted.