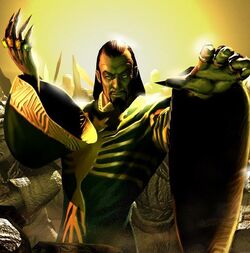 Little is known about Mandarin's life before the formation of the Masters of Evil. It can be assumed to be similar to his mainstream counterpart.

The Mandarin joined Doctor Doom's Masters of Evil, but was rejected after attempting to take control of the team from Doom. To get revenge from him, and to mislead the Ultimate Alliance in their search for Doom, Loki shapeshifted into the Mandarin in Atlantis in order to get the Alliance's attention on him, and to chase him to his castle. After his guards Dragon Man, Ultimo, and Grey Gargoyle, were beaten, the Mandarin was confronted by the Alliance and defeated, where he revealed they were tricked by Loki.

The Mandarin possesses superhuman physical prowess. He can also survive for years without food and water by living on stored Chi.

Transportation: Teleportation via his rings or other technologies.
Weapons: Makluan Power Rings

Retrieved from "https://marvelcomicsfanon.fandom.com/wiki/Mandarin_(Earth-6109.2)?oldid=128745"
Community content is available under CC-BY-SA unless otherwise noted.