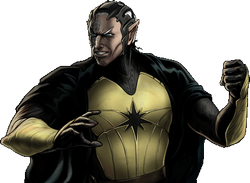 Five thousand years ago, a cosmic event known as the "Convergence" occurred. Malekith , the leader of the Dark Elves at the time, sought to use this event to release the Aether, a force of extreme power from before the universe existed. Malekith's goal was to plunge the Nine Realms into an eternal darkness. However, before Malekith could achieve his goal, Asgardians led by All-Father Bor intervened, and took the Aether. Thus, a battle with the Dark Elves began.

On the verge of defeat, Malekith sacrificed his own army so that he, Algrim, and other Dark Elves may escape. They escaped Svartalfheim on a Dark Elf warship to somewhere deep in space, where they remained in hibernation for another five millennia.

Malekith, having felt the call of the Aether, awoke and announced to his remaining kin as they awoke that the Convergence had returned. Sensing the Aether in Asgard, Malekith sent his second-in-command, Algrim to infiltrate Asgard and disable Asgard's defensive measures.

Malekith was the most ruthless of his kind, willing to do whatever it takes for his goals to be fulfilled, an example of this would be when Asgardians and Dark Elves were battling on Svartalheim, Malekith sacrificed his own troops in a desperate bid to kill his foe, he also put the wellbeing of his loyal second in command by Kursing him. Malekith was vengeful, cruel, vicious, depraved, callous and black-hearted. After losing the war, Malekith, his army and his super-weapon, the Aether were trapped in stasis for centuries however this did not soothe his hatred, he became obsessed with the destruction of the Nine Realms and sought the legendary dark power of the Aether. He also possessed a strategic mind, being able to implant a Kursed One in Asgard and then able to launch an all-out attack on the city, Malekith was able to locate where the Convergence would take place and use it to destroy the Nine Realms.

Due to the power of the Aether Malekith possessed a superhuman amount of physical strength and was able to hold his own against Thor, he was also able to absorb the lightning fired by Mjolner. Due to him having the power of an Infinity Stone Malekith had the capability to destroy a world but he was not invincible as he was crushed by a Dark Elf Flagship Which killed him.

Malekith possesses various superhuman attributes, some of which are common to his race.


Superhuman Speed: Malekith can run and move at speeds that are beyond the physical limits of even the finest human athlete.


Superhuman Stamina: Malekith's musculature produces considerably less fatigue toxins during physical activity than the musculature of an ordinary human. He can physically exert himself at peak capacity for up to 24 hours before the build up of fatigue toxins in his blood begins to impair him.


Superhuman Durability: Malekith's body is tougher and much more resistant to physical injury than the body of a human. Malekith can withstand powerful impact forces, exposure to temperature and pressure extremes, falls from great heights, and powerful energy blasts without being injured.


Superhuman Agility: Malekith's agility, balance, and bodily coordination are enhanced to levels that are beyond the natural physical limits of the finest human athlete.


Superhuman Reflexes: Malekith's reflexes are similarly enhanced and are superior to those of the fineat human athlete.


Extended Longevity: Malekith, like all Dark Elves, possesses a greatly extended lifespan and ages at a much slower pace than humans. He is also immune to the effects of all known Earthly diseases and infections.


Regenerative Healing Factor: In spite his his body's increased durability, it is possible to injure him. However, Malekith's metabolism enables him to repair damaged bodily tissues much faster and more extensively than a human is capable of. The limits of Malekith's natural healing abilities aren't known, but it is believed that he isn't able to regenerate missing limbs or organs without magical assistance.


Magical Energy Manipulation: Malekith can manipulate great amounts of mystical energy for a number of purposes. Malekith has been known to often use his mysical powers to alter his shape and appearance. He can even use this ability to transform himself into a mist-like substance, allowing him to fly through the air over great distances. He is also capable of using this same energy to teleport himself across great distances, including between dimensional barriers. Malekith can also generate powerful blasts of concussive energy for destructive purposes. It is also believed that Malekith can use this mystical energy to increase most, if not all, of his superhuman physical attributes temporarily. He has used it to increase his physical strength.

Like all members of his race, Malekith has demonstrated a significant vulnerability to iron. For example, his mysical powers are useless against objects composed of iron. Also, being struck by an object made of iron, or even holding an iron object, can cause him great physical pain and injury whereas a similarly durable and powerful metal might cause him no discomfort at all.