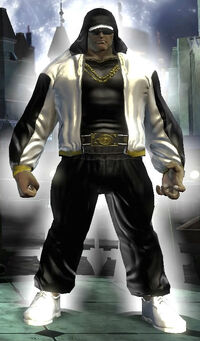 Earth-2210
Base Of Operations
The Shadow Base
Characteristics
Gender

Malcolm is a mutant that has the ability to control the elements, and is known to many as Reign. When Malcolm was a teenager he realized that he was different to the other children in his school as he could control fire. He was soon an out cast to the others as Malcolm had used fire on one of the bully's that was teasing by calling him a freak. It was then that Malcolm was approached by another mutant called Charles Xavier, and asked to attend his school for the gifted. During his time at the school for gifted Malcolm had made a few new friends one of which was Riley O'Rourke who gave him the nickname Reign. Later on in his life Reign became a founding member of a small group of heroes called "The Shadow Warriors" along with Ryan Marek, Phoenix Girl, Infinite Man, Nightrous and Red Mist.

Elemental Control: Is the power to control all four elements and bend them at will, and can be used as fighting techniques known as bending.

Peak Human Strength: Malcolm regularly bench-presses at least 1500 lbs.
Peak Human Reflexes: He's reflexes are practically superhuman.
Peak Human Speed: He can run at speeds comparable to the finest competing athletes.
Peak Human Endurance: His endurance was comparable to that of the finest decathlon participant.
Peak Human Agility: His agility is greater than that of a Chinese acrobat and an professional gymnast.
Expert Acrobat: Proficient in gymnastics and acrobatics, to the peak of human ability.

Malcolm has the strength off a top body builder in his prime.

Equipment: None known.
Transportation: Malcolm uses his ability of air bending to fly.
Weapons: Malcolm has a sword that he can turn into a flame sword.

Retrieved from "https://marvelcomicsfanon.fandom.com/wiki/Malcolm_Durbridge_(Earth-2210)?oldid=236462"
Community content is available under CC-BY-SA unless otherwise noted.