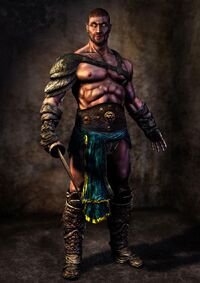 Malachai was born a werewolf 8000 BC in Egypt, air to the pharaoh throne he had a good upbringing and had an eye for chariot racing. Malachai didn’t know he was a werewolf to after he got a witch to make him immortal, and due to the effect to work Malachai had to drink the blood of he’s slave. Doing so Malachai couldn’t stop and killed the slave starting he’s werewolf curse making him the first Hybrid. In the first few days of becoming immortal Malachai had a big taste for blood killing more and more slaves every day. Eventually he was able to control he’s hunger and take seat on the Pharaohs throne. Being the first of he’s kind Malachai didn’t know of any he’s powers not knowing that he’s blood could heal or turn other people Malachai spent the first thousand years without turning anyone. After 3000 years of being in a deep sleep Malachai was awoken by the Defenders in order to help them defeat the Hand. It was Daredevil that discovered him, but it was his team mates Iron Fist, Power Man, Power Woman, and the Punisher that helped him.

Malachai powers and abilities grow stronger with age, blood, or by transforming into his werewolf form.

Need for Blood as a half vampire Malachai must intake at least 5 pints of blood a day.

The moon amulet of life in order for the witch to make Malachai a Hybrid she had to bind he's soul with a object from he's human life. If this object was destroyed it would make Malachai a normal Vampire.

Sire Malachai is not able to make other hybrids he can only turn and sire vampires.

Equipment: Coffin: Malachai has a coffin for when he puts himself into a 500 year slumber.
Transportation: Malachai can run at high speeds and has know use for any other transportation.
Weapons: He uses he's hybrid powers as he's weapons

Retrieved from "https://marvelcomicsfanon.fandom.com/wiki/Malachai_(Earth-2210)?oldid=255939"
Community content is available under CC-BY-SA unless otherwise noted.