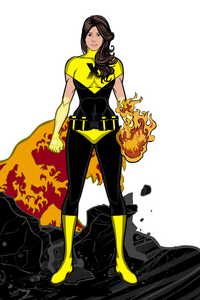 Magma possesses the normal human strength of a woman of her age, height, and build who engages in moderate regular exercise. While in his Atlas form she is able to augment her strength.

Praenomen: Maiara. While praenomen had fallen out of use in Ancient Rome, a new use for female praenomen was found in Nova Roma. The use was revitalized for daughters with indigenous blood who'd be given indigenous names that would be used when addressed by natives in the Tupi tongue.
Nomen (Gens): Iulia. When addressed in the Latin tongue on the other hand, Maiara would be addressed as the feminine form of her family name (similar to modern English surnames). As a member of the Iuliī gens, she'd be called Julia.
Cognomen (domus): Iula. Due to multiple branches of families surfacing in Ancient Rome, different branches (or domī). In Mairara's case, she descends from the Iulia Iula line.
Agnomen (honorific): Magna. After the emergence of her impressive mutant abilities, her community would grace with with an honorific cognomen, or agnomen, to the end of her name: Magna for Great.

Retrieved from "https://marvelcomicsfanon.fandom.com/wiki/Maiara_Iulia_Iula_(Earth-515)?oldid=174017"
Community content is available under CC-BY-SA unless otherwise noted.