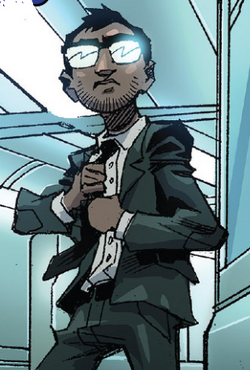 Mahir Ranzack was visited at the Garage by fellow S.H.I.E.L.D. Agent, Charles Hinton, who unbeknownst to Ranzack, was being possessed by an Inhuman named Mosaic.

Mosaic as Hinton needed access to the upper deck of the base, and he knew Ranzack had knowledge of the codes, so he then took over Ranzack and proceeded to the secure area of The Garage. As he made it there, he was stopped by Agent Boyle and two other guards. Seeing no way out, Mosaic left Ranzack's body and inhabited Boyle, which left Ranzack unconscious on the ground.

Retrieved from "https://marvelcomicsfanon.fandom.com/wiki/Mahir_Ranzack_(Earth-1010)?oldid=191959"
Community content is available under CC-BY-SA unless otherwise noted.