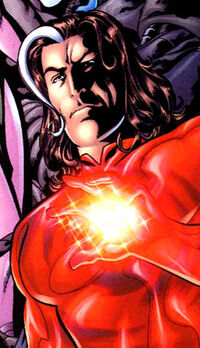 Being mutant can make any of them feel cursed and willing to be cured but the philosophy is the acceptance from within that has failed mutants from the last decades but for Magnus Lehnsherr it is a lesson worth learning and to understand better of yourself. Magnus is the son of X-Men veterans Magneto and Rogue; Magnus is cursed with a mutant power that is a combination of his parent's abilities: gifted with amazing magnetic powers, he would unfortunately turn whomever he touched with his bare skin into metal. He must wear a skin suit that covered his entire body to prevent this from happening. Magnus is also Sarah’s older half-brother and the stepson of his mother’s current husband Gambit. Magnus is very protective of Sarah and very close to his cousins Tommy, Billy, Salamander and T.J. When Magnus became an X-Man he received a new skin suit which doubles as an official X-Men uniform with the traditional colors of Blue and Gold to replace the previous skin suit he had before.

Particle Conversion: He is able to create objects by pulling metal particles out of the air. With this ability he created objects as simple as credit cards, and complex such as Cerebro units.

He is allegedly able to use his magnetokinesis to boil people's blood by acting on the iron in it.

Retrieved from "https://marvelcomicsfanon.fandom.com/wiki/Magnus_Lehnsherr_(Earth-16160)?oldid=241661"
Community content is available under CC-BY-SA unless otherwise noted.