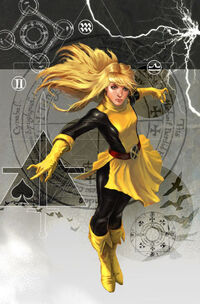 In this reality, Magik is not a lesbian. Her feelings toward Kitty was her care for a friend, it was hero worship, and the feelings she may have for an older sister. Some may claim that she is bi-curious though.

Retrieved from "https://marvelcomicsfanon.fandom.com/wiki/Magik_III_(Earth-1992)?oldid=85834"
Community content is available under CC-BY-SA unless otherwise noted.