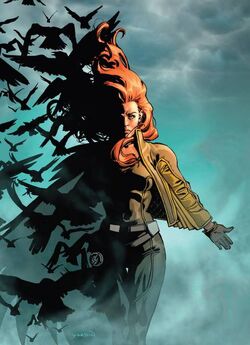 Ya' sure you don't want to scream first, lad? I mean, if I scream, things ain't gonna go well for ya', or for everyone around here...

Born around the early 1950s in Galway, Ireland though later immigrated with her family in Maine, United States, Maeve Rourke grew up discovering herself to be a mutant with the ability to create powerful sonic waves with her voice, something that she tries to use whenever tries to hang out with her peers or whenever she flirts with the very schoolmates and strangers she finds an attraction towards. Most people would find her mutant status to be appalling and disgraceful, as usual during the time, though there were some who were astonished and sometimes, even envious because of what she has, consisting of her family and her closest friends, who unfortunately had mutantphobic parents and friends just as well.

Maeve was seen inside an aquarium when she failed to impress a woman with her a slight demonstration of her powers, in which she was recruited by Charles Xavier and Erik Lensherr in order for her to join their team of mutant peacekeepers they were forming for the C.I.A., which consisted of other mutants including Hank McCoy, Lou Carosella, Warren Worthington II, and Raven Darkholme. After the Hellfire Club tried to recruit them, Sean and the others relocated to Xavier's mansion where they began training to defeat Shaw. Xavier resolved to stop the Hellfire Club and began to train his young group in preparation for conflicts to come. Throughout the training, Xavier taught Maeve how to control her ability and use it to fly by using a harness developed by McCoy. While training, Maeve often described herself using her powers as a Banshee, eventually making it her codename instead of "Siryn," which most of her teammates personally preferred the latter sounded better. During the skirmish against with the Hellfire Club which took place in the now historical Cuban Missile Crisis, Erik and Charles' views regarding the path of the emerging mutant race diverged into two main paths, resulting in the end of their friendship and the fracturing of their team.

From the ashes of the two conflicting mutant ideologists' divergence (Xavier's Division X and the Magneto's Brotherhood), Maeve decided to chose neither of the sides and left to live her own life by going back to her hometown in Ireland, wherein she eventually got the chance to work as a detective in service for her home, since being a detective reminded Maeve of her short-lived yet fulfilling days as a member of Division X. As a fierce, just, and righteous detective, Maeve was mostly a lone wolf during her missions, proving that as a strong independent mutant woman, she could handle the greatest criminal threats she and her fellow comrades have faced as if they were the lightest of tasks even without having to use her mutant powers, an essential attribute that she has to keep on hiding, otherwise she'll lose her job and once again be discriminated by her town if her real nature somehow gets exposed into her workplace, or worse, the public.

For years, Detective Maeve spent her life other than being a detective as a frequent and regular bar customer, drinking every night to distract the reality of her kind constantly living the oppression and prejudice of those who either fear or despise someone like her. Despite having dates and one-night-stands with several men and women throughout her detective career, Maeve still couldn't bare the fact that she had always been feeling alone and depressed inside, ever since she left Division X, which was now publicly re-branded as the X-Men by the late 1980s. Whenever the skies would turn bright, Maeve would look up on the clouds and sob in silence, realizing that she may have regret her decision of leaving the only family who accepted her for who she was. Such heavy feeling that Maeve had been enduring eventually lightened up, by the time she met the younger rookie detective Sean Cassidy: the first and worst partner she had ever met.

Teaming up, Maeve initially disliked Cassidy whenever their own a mission since the latter was mostly clumsy and anxious in dealing with criminals, at least without a veteran to look up to. Maeve questioned how Cassidy even got the smarts and qualifications of being a detective when he lacked the guts to be one, to which her superiors simply flattered her that she was "one of the best among them," as an excuse that most of their colleagues didn't want to take care of the rookie. Having no other choice but to follow orders, Maeve endured becoming a mentor figure to her partner for the next following years of her time as a veteran. However, surprisingly enough, Maeve's frequent annoyance teaching and training Sean Cassidy was one of the many first instances that has gotten her and the rookie detective a lot closer, which she never expected would even happen.

For the first time since leaving her mutant family, Maeve became infatuated in him without immediately realizing it, and by the time she did realize, she feared what she was feeling, because Cassidy was human. While the two would eventually develop to have a friendly mentor-mentee relationship even outside of work, Maeve chose to both keep her mutant status and attraction for him, both which she did not hid well on the the night Cassidy were almost shot by mobsters in the middle of the street. As an act of instinct to protect her partner's life, Maeve vocally unleashed her sonic powers once again after several years. Screaming at the attackers which easily knocked them, an extremely-agitated Maeve tried to run away from the scene only for Cassidy to follow her out of concern, calming her down even if he finally knew her secret as a mutant.

Maeve told him to stay back and stay away, but Cassidy told her that he isn't afraid. As Maeve temporarily hid and stayed at her partner's place away from the mobsters for the night, the two opened up to each other, with Maeve telling her life growing up as a carefree mutant at Belfast, Maine in the United States, while Cassidy confessed that he had a mutant sibling who unfortunately died when it was still a fetus. One thing led to another and then another, although as dawn reaches, Cassidy was perplexed to find Maeve aiming a pistol to his head. Despite knowing how they felt for each other, Maeve still knew inside that she couldn't and probably wouldn't trust anyone, even her own partner, to which she left his apartment afterwards.

Cassidy was dejected, but so was Maeve since she truly felt his sincerity. Nevertheless of her overwhelming feelings, she focused on her ultimate goal to leave her country after finding her own colleagues and superiors at have found out that she was a mutant in the form of their superiors being one of the notable witnesses. Knowing how mutantphobic most the people on her town was, Maeve planned to move back to the United States, considering of rejoining the X-Men in the New York's X-Mansion. On her way to Dublin Airport, however, Maeve was unlucky that the henchmen of the very mobsters who she encountered the other night were chasing after her. At that point, her luck was running out, until Cassidy suddenly came to her aid after revealing that he's willing to help her get to the States unscathed. Assuring that she could trust him no matter what, Maeve was able to get into her flight just in time while Cassidy distracted the mobsters outside the airport.

While inside the plane, Maeve struggles to keep her tears from bursting throughout the flight, thinking that her initial distrust towards Cassidy have gotten him in danger, and despite all that he still risked his life just for her. Now that Cassidy's on his own; so was Maeve, all over again. Returning to the States, Maeve thought it was the best not to come back to Xavier and his mansion, believing that it would only burden the team even more when she comes back to the team, remembering her last encounter with them in Cuba. Instead, she lived her non-employed days staying at her former city in Belfast, Maine, where she was raised. Upon staying there, Maeve was also captivated and was given another reason to live when she had found out she was pregnant with her and Cassidy's child. Nine months have passed, Maeve and Sean's beautiful child was born, to which the former named her Theresa, or Terry for short after finding out that she was a girl, naming it after Cassidy's deceased sibling. Despite not having both her lover and the father of her daughter by her side, Maeve promised that she would raise Terry, since after all, she is her world.

Homo Superior Physiology: Banshee is a mutant who possesses unusually strong sonic abilities. She created powerful sonic waves with her voice with which she could create various effects, often with the assistance of psionic abilities which function only in unison with her sonic abilities.

Retrieved from "https://marvelcomicsfanon.fandom.com/wiki/Maeve_Rourke_(Earth-61615)?oldid=267761"
Community content is available under CC-BY-SA unless otherwise noted.