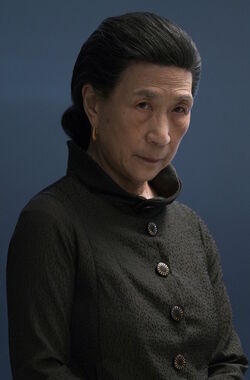 Man cannot be both savior and oppressor... Light and shadow. One has to be sacrificed for the other. Choose... And choose wisely. Or others shall choose for you.

When Harold Meachum was diagnosed with terminal cancer, he went to Gao for aid who promised to return him from the dead. For a while, Gao had her division of the Hand infiltrate Rand Enterprises and kept watch on Meachum, who was under the Hand's control after returning from the dead.

Madame Gao is a master in the drug trade; she is in charge of an illegal drug manufacturing company where her subordinates allowed themselves to be blinded, except for the security guards. Gao was approached by Wilson Fisk for assistance in his ambition to change Hell's Kitchen and sought to assist her in the distribution of her heroin. Together they worked out a system where Gao's blind workers would take bags of heroin to Vladimir and Anatoly Ranskahov who would help deliver it.

One night, Madame Gao sat atop a building, along with Nobu, Leland Owlsley, Anatoly Ranskahov, and Vladimir Ranskahov, awaiting the arrival of Wilson Fisk; James Wesley came instead, citing that Fisk was busy. Gao listened as Owlsley protested about Fisk's absence and Anatoly and Vladimir called Wesley a lapdog. When Wesley questioned Anatoly and Vladimir about why their payment was short, they explained that a masked man freed their captive girls and beat up their subordinates. Gao spoke in Chinese, but only Wesley understood, asking if the masked man took the girls for himself. Gao quietly listened as the meeting continued.

Gao was later called for another meeting, this time without the Ranskahov brothers; Leland Owlsley commented on the pints of blood being drained from a nearby car, to which Gao only laughed. They were interrupted by the arrival of James Wesley and Wilson Fisk; Gao told Fisk she was happy to see him. Fisk however announced that the Ranskahov brothers were no longer a part of their organisation since Fisk had murdered Anatoly. Both Gao and Nobu expressed their anger at the news; Gao was told to continue moving her shipments of heroin to the Russians until Fisk could take over the distribution. The group agreed on the matter and departed while Fisk offered to walk Gao to her car, where she asked if he wanted something from her.

I am not here to pluck flowers from the thicket. This is a courtesy, because you have shown me respect. Restore your house to order, or I will begin dealing with Nobu and Leland directly.

Without much effort, Gao learned the location of Wilson Fisk's Penthouse and arrived for a meeting with him. Fisk poured her tea which he had brought back from his last trip to China which Gao approved of, but she assured him that she had not come to his home for tea. Gao then began speaking to Fisk in English and revealed that she was aware that Fisk spoke both Chinese and Japanese so did not need James Wesley to translate for him.

They began speaking to each other in fluent Chinese and Gao told him that neither Nobu nor Leland Owlsley were happy with Fisk's handling of recent events. She called Fisk emotional and sloppy, making an example of her discovery of his residence as proof that Fisk was losing control. Before she departed, she told Fisk if he did not restore his business to order, she would cut him out of their organization and begin dealing with Nobu and Owlsley directly. She calmly left Wilson Fisk's Penthouse, thanking him for the tea as Fisk fell into a rage due to Gao's threat and overthrew the table.

There is conflict within you."
"Conflict?"
"Man cannot be both saviour and oppressor, light and shadow, one has to be sacrificed for the other. Choose, and choose wisely, or others will choose for you.

Gao had a meeting with Wilson Fisk on a rooftop garden, when he arrived she commented on James Wesley's absence, as he was no needed to translate. Gao spoke to Fisk in Chinese and told him a metaphorical tale of a snake that died after mistaking an elephant for prey. When Gao expressed her disappointment at Nobu's death, Fisk claimed he did not expect Nobu to go against the masked man himself.

Gao warned Fisk that the Hand were preparing for retaliation after their boss's death, she asked him if his ambition would ever turn to her, but Fisk assured her that she had his respect so he would not. She told him his mind was distracted by his heart since falling in love with Vanessa Marianna, switching to English she told him to decide if he was the saviour or oppressor of the city.

Believing Fisk's love for Vanessa Marianna would endanger their business, Gao joined forces with Leland Owlsley and together they organized a plan to poison Marianna at the benefit Fisk was attending. Although Marianna did drink the poison, she was rushed to the hospital in time to be saved.

All those people, you took their eyes."
"No, they blinded themselves."
"Why would they do that?"
"Because they have faith.

While in her warehouse, Gao watched over her blind workers as they continued producing Steel Serpent Heroin. However, she spotted the masked man in her warehouse, who was snooping around to find for answers about the drug trade in New York City. Gao yelled a warning to her workers and ordered them to attack, hoping that their numbers would overwhelm him and he would be detained long enough for her to escape.

While her workers found and surrounded the intruder, Gao took two armed guards with her and attempted to escape the warehouse during the fight. However, just as Gao quickly moved through the warehouse towards safety, they were attacked by the masked man who quickly defeated the guards and confronted Gao, causing a fire to break out when one of her guards shot a nearby barrel. With just Gao and the man alone in the slowly burning room, Gao stood tall and prepared for the confrontation with the feared vigilante who had so far defeated both Nobu Yoshioka and the Russian mob.

The man demanded to know why her people had been blinded, but Gao assured him that they had blinded themselves because of their faith in what she stood for, and the now the masked man had taken that faith away from them. The man questioned if their faith was in her drugs but Gao insisted it was about more than heroin and that he had no faith at all. When the man asked about Wilson Fisk, Gao struck him in the chest and knocked him a few feet across the floor. As the man recovered from the shock, Gao vanished without a trace, while the warehouse and all of her heroin burned down.

Reflecting upon the Future

I will visit my homeland, and reflect upon the future."
"Home? China?"
"It is a considerable distance further. We shall not speak again.

Having escaped with her warehouse and her business burnt to the ground, Gao met with Leland Owlsley to discuss the recent events. She greeted Owlsley in English, apologising for her lateness. She informed Owlsley about the encounter with the masked man and the destruction of the heroin. They discussed the risk of Wilson Fisk learning of their plan to assassinate Vanessa Marianna and Owlsley asked if Gao was responsible for killing James Wesley as well, but she assured him she was not. As Gao left the meeting, she informed Owlsley that she was returning to her homeland to reflect upon the future. Knowing that Fisk would likely learn the truth about Marianna's poisoning, Gao told Owlsley that they would not speak again as she walked away.

I see from the uniform you've taken the devil's name to heart."
"Yeah, I had to, because of people like you."
"So you continue your fight, but for how long, I wonder.

Gao either returned or never left New York City, continuing her heroin trade despite running into trouble when a rival dealer known as the Blacksmith began stepping into her territory. Gao was visited by Daredevil who demanded to know how and where he could find the Blacksmith. Once Gao had ordered her men to leave, they discussed the Blacksmith, with Daredevil threatening to call the New York City Police Department to her location if she did not assist him in the search.

Madame Gao started to explain how the Blacksmith was eliminating her chemists and street dealers, causing trouble for her. Daredevil assured her that he could end the Blacksmith's career that night. Gao directed him to the docks as her men believed he brought his drugs over by ships although she did not know which pier and so could not have him killed herself, advising him that the Blacksmith's ship would be well guarded. As Daredevil thanked Gao for all of her assistance and prepared to leave, Gao then warned him that his path would not be an easy one before allowing him to leave.

After hearing of Danny Rand's return to K'un-Lun, she sent Hand members Bride of Nine Spiders and Scythe as informants to face him in the Da Jue Zhan, the last trial before Rand could establish himself as the Iron Fist.

Madame Gao is a ruthless criminal, able to gain complete trust of her subordinates and even made them blind themselves. While working with others she is highly calculating and even spoke only Mandarin to make them underestimate her and let them believe she would not understand them without translation. She was quick to turn on her allies but seemed to respect Wilson Fisk more than the rest of his associates, as she warned him that he was losing himself on his mission. Despite this she ultimately ended up trying to kill Vanessa Marianna as she considered her a distraction for him. She seemed to have some level of respect for Daredevil, however, and when their interests temporarily aligned, she willingly gave him information on the Blacksmith.

Madame Gao speaks a lot in riddles and surrounds herself with an air of mysticism during her interactions.

I speak many languages."
"How many?"
"All of them.

Retrieved from "https://marvelcomicsfanon.fandom.com/wiki/Madame_Gao_(Earth-1010)?oldid=198700"
Community content is available under CC-BY-SA unless otherwise noted.