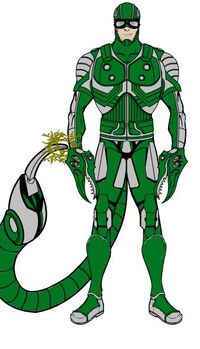 MacDonald Gargan was an investigative journalist who worked for the Daily Bugle and hoped to make a name for himself, particularly setting his sights on finding out the true identity of Spider-Man after being given the assignment by JJ. After several failed attempts and piece of public humiliation Gargan became particularly obsessed with bringing him down. J. Jonah Jameson saw in him an opportunity and gave him the chance for payback against Spider-Man by putting him through an experiment that could give him the power to be a superhero to challenge him. Becoming the Scorpion-Man, he was endorsed by the Bugle and his identity was known to the public. Jameson priding him in contrast to Spider-Man as someone "without anything to hide". As Scorpion-Man Gargan would come to blows with Spider-Man, and also targeted the criminal organization ran by New York's premiere crime boss the Kingpin. Kingpin would, similarly as he did to Spider-Man after he showed up, tried to bribe Gargan into "looking the other way" on certain crimes of his choosing. Gargan refused, and that led to both his then best friend and girlfriend being hospitalized by some of the Kingpin's men which sent Gargan into a rage.

Retrieved from "https://marvelcomicsfanon.fandom.com/wiki/Mac_Gargan_(Earth-515)?oldid=236203"
Community content is available under CC-BY-SA unless otherwise noted.