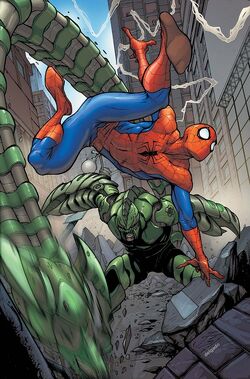 You're regretting that almost immediately, right?

Former private investigator MacDonald Gargan was hired by J. Jonah Jameson to find out how Peter Parker was able to get incredible pictures of Spider-Man. Gargan's efforts to locate Peter in order to find out the truth triggered Parker's spider sense, making him easily avoidable every time. Frustrated, Jameson decided to pay $10,000 to Gargan to be the subject of an experiment. The experiment, created by Dr. Farley Stillwell, a researcher in animal mutation, which endowed the subject with the characteristic of another animal. Following genetic modifications, Stillwell outfitted Gargan with a mechanical power-suit to give him a durable exoskeleton with cybernetic stinger. Unfortunately the process resulted in the loss of Gargan's sanity, and the creation of the super-powered criminal menace known as the Scorpion.

But the experiment later came to affect Mac Gargan's mind, forcing insanity. He blamed J. Jonah Jameson for his destroyed mind and tried to kill him, forcing Spider-Man to intervene. Gargan has attempted numerous times to get Spider-Man and Jameson, but Spider-Man always gets to save both their lives. He continued his vengeance against Jameson a few times, until he realized that those new abilities that he gained wasn't actually a burden to him, but was a powerful weapon that he can use for a lifetime. In doing so, he spent his abilities and his enhanced suit to pursue in a life of crime as the might and powerful Scorpion, making him one become one of the most recognizable and infamous rogue Spider-Man has ever faced throughout the years. Due to his long history grudging against the web-slinger, he has eventually been accepted as a reserve member at the Sinister Seven (later known as Sinister Six), and Gargan has joined the team several times since then until now, when he needed the others' help to take down Spider-Man.

After the events of Secret Invasion, a seemingly-changed Norman Osborn became a hero by killing the Skrull Queen on national television. He was put in charge of the Superhuman Defense Initiative. After dismantling S.H.I.E.L.D., Norman makes himself Director of a newly-secret organization known as H.A.M.M.E.R., essentially the new S.H.I.E.L.D. of Norman Osborn, decided that there was a need to make some new Avengers. Norman started recruiting internally from one of the most deadly and one of the most dangerous villains that were imprisoned at the Raft since the days of Civil War, in order to form the Dark Avengers. Being freed by Osborn from prison in exchange of joining his new squadron, the latter offered him as a compatible candidate to the Venom symbiote, a portion that was separated to the rest, which was still attached to the villain turned antihero Eddie Brock.

Gargan as the all-new Venom was given some kind of medicine to have him appear normal instead of a hulk-like monster to become Spider-Man and Noh-Varr took on the role of Captain Marvel instead of Marvel Boy, as an act of honoring his father's memory as a Kree military captain. Finally, Osborn needed some kind of symbol to replace Captain America and Iron Man altogether, making himself the alter ego of the Iron Patriot. Osborn, with the help of the Ghost, hacked into Iron Man's vault to gain access to all of the Iron Man armors to create himself the Iron Patriot armor. A public press conference was later held at the reopened Avengers Tower where Norman unveiled this newest incarnation of the Avengers. Unbeknownst to everyone in the public, these team was formed by Osborn for achieving his self-ambitious visions and his mad quest for power.

After knowing that he had Thor Odinson's D.N.A. and several memories from his genetic template's past, the Dark Avenger Ragnarok manages to remember, track, and even find the location of the portal leading to the realm Asgard due to the Cabal's orders. Noh-Varr, however came to realized Osborn's insane personality and his worst intentions, causing for the anti-hero to secretly betray the Dark Avengers and warn the heroes about his teammates next scheme, even knowing the risks that it would possibly get him arrested in the end for joining the team in the first place. He, alongside the Dark Avengers and the Cabal led by the two-faced Iron Patriot, finally extracted their plan to breach, assault and invade Asgard before the Avengers and the other heroes could arrive at the scene even stop their evil scheme at invading the great Asgardian haven.

As his diabolical forces extremely battle with the Asgardians with the imbued cosmic power of their former villain Mysterium, the Olympian Ares eventually sees the error in Norman's ways and turns against him. He orders Sentry to attack Ares and he brutally paralyzes Ares during their brief stand-off. To help the gods, the Avengers along with some of the other heroes came arriving to attack Norman and the Dark Avengers to prevent the ultimate destruction of the city of the deities. As the Avengers was close into beating Osborn's forces, he begins to lose all his sanity and manipulated the Sentry to destroy half the portion of the Asgardian city, transforming him into the Void as the heroes look on in horror as they have to fight the awakened monster.

Although the latter's rage had recklessly wreaked havoc across the realm of the gods, the monstrous entity and were still defeated in the very finale, only to cost of several casualties, including Loki himself, along with the half of the city's destruction at the hands of Osborn. In the aftermath of Siege, a ravenously insane Osborn was imprisoned within the Raft, with Sofen, Bullseye, and Gargan being imprisoned in several other maximum prisons throughout the United States, with the exception of Noh-Varr, who was honored by the authorities and his allies for helping them defeat his own evil team.

Unique Mutate Physiology: As the Scorpion, MacDonald Gargan possesses all the powers of a scorpion. When he acquired the Venom symbiote, he retained some of his scorpion-like powers due to the removal of his suit, and was granted the additional powers of the Venom symbiote, granting him several abilities similar to Spider-Man.

Retrieved from "https://marvelcomicsfanon.fandom.com/wiki/MacDonald_Gargan_(Earth-61615)?oldid=232412"
Community content is available under CC-BY-SA unless otherwise noted.