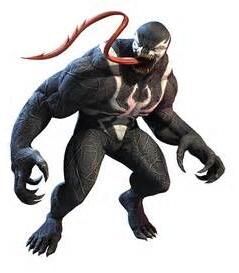 Little is known about Gargan's life before the formation of the Masters of Evil. It can be assumed to be similar to his mainstream counterpart.

Some time after the Masters of Evil had been defeated, Mac bonded with the Venom symbiote. He was captured by S.H.I.E.L.D. and Iron-Man's pro-registration movement and was injected with experimental nanites to keep him under control. He joined the Pro-Registration forces in protecting a convoy of captured unregistered heroes with Lady Deathstrike. Venom aided in defeating Prodigy before being returned to base.

When the nanites took over their hosts' minds, Venom became a slave to The Fold and helped blow up the chemical plant the two forces of the civil war fought on. Later, Venom teamed up with Green Goblin & the Hobgoblin to destroy the palace of Wakanda, but were both incapacitated and freed from the nanites. The trio then joined the Ultimate Alliance, and were likely sent to jail after the Fold's defeat.

When Spider-Man, Wolverine, Hulk, and Deadpool responded to a distress call from a S.H.I.E.L.D. prison transport, they are suddenly attacked by Gargan. The villain wants revenge on the U.S. government for inadvertently creating the Fold; claiming that formally infected supervillains have gone into seclusion, others even committing suicide. Venom is of course defeated.

A whole 12 weeks later, Venom ends up confronting Cyclops, the Living Laser, Storm, Iceman, and the Crimson Dynamo in the San Diego Zoo. The symbiote having detected someone in the vicinity, and Gargan decides to get some payback. But he is once again defeated.

Retrieved from "https://marvelcomicsfanon.fandom.com/wiki/MacDonald_Gargan_(Earth-6109.2)?oldid=259352"
Community content is available under CC-BY-SA unless otherwise noted.