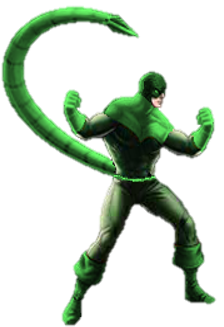 Brown, (shaved bald)
Unusual Features
Scorpion-like armor and tail attached to his body, no longer has a jaw
Status
Citizenship

Former private investigator Mac Gargan was hired by J. Jonah Jameson to find out how Peter Parker was able to get incredible pictures of Spider-Man. Gargan's efforts to locate Peter in order to find out the truth triggered Parker's spider sense, making him easily avoidable every time.

Frustrated, Jameson decided to pay $10,000 to Gargan to be the subject of an experiment. The experiment, created by Dr. Farley Stillwell, a researcher in animal mutation, which endowed the subject with the characteristic of another animal. Unfortunately the process resulted in the loss of Gargan's sanity, and the creation of the super-powered criminal menace known as the Scorpion.

Over the years Scorpion fought and was bested by Spider-Man many times. Most of these confrontations were the result of Spider-Man stepping in on an attempt on the life of Jameson, who Gargan hated even more than Spider-Man. With his mechanical tail, speed, and strength, Scorpion was always been more than a match for Spider-Man. Only the skill, experience, and quick wit of the web head helped him defeat Gargan.

As the Scorpion, MacDonald Gargan possesses all the powers of a scorpion.

Investigative Prowess: Before he became the Scorpion, MacDonald Gargan was a detective with some investigative skills.

Formidable Opponent: Gargan's powers make him a formidable combatant, even though he has had little formal training.

Retrieved from "https://marvelcomicsfanon.fandom.com/wiki/MacDonald_Gargan_(Earth-1010)?oldid=42593"
Community content is available under CC-BY-SA unless otherwise noted.