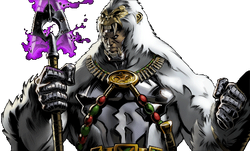 M'Baku was one of the greatest warriors of the African nation Wakanda, second only to T'Challa, the Black Panther himself. While the Panther, king of the Wakanda, was on leave from his royal duties to serve the Avengers in America, the ambitious M'Baku plotted to usurp the throne. The Wakandan culture had evolved from a hunter-warrior society and was traditionally ruled by its greatest warrior. The Black Panther had outlawed the rival White Gorilla cult from Wakanda while the Panther cult was dominant. M'Baku flouted T'Challa's edicts and revived the White Gorilla cult, personally stalking and killing one of the rare white gorillas living in the jungles near Wakanda. Bathing in the gorilla's blood and eating the gorilla's flesh mystically conferred its great strength upon M'Baku.

When the Black Panther returned to Wakanda with the Avengers, M'Baku, calling himself the Man-Ape, openly challenged the Panther's right to rule. M'Baku deplored T'Challa's technological revitalization of Wakanda and sought to have all technology outlawed so the nation could return to its natural primitivism. After a protracted battle, the Man-Ape bested the Panther. However, when he bound T'Challa to the giant statue of a panther and tried to topple it upon his enemy, the statue instead crumbled, burying M'Baku.

Man-Ape possesses various superhuman abilities as the result of a magical ritual in which he killed a sacred White Gorilla, bathed in it's blood, and consumed it's flesh.


Superhuman Strength: Due to the ritual, Man-Ape possesses superhuman strength enabling him to lift about 10 tons.


Superhuman Stamina: Man-Ape's advanced musculature produces less fatigue toxins during physical activity than the musculature of an ordinary human. He can physically exert himself at peak capacity for several hours before the build up of fatigue toxins in his bloodstream begins to impair him.


Superhuman Agility: Man-Ape's agility, balance, and bodily coordination are enhanced to levels that are beyond the natural physical limits of even the finest human athlete.


Superhuman Reflexes: Man-Ape's reflexes are similarly enhanced and are superior to those of the finest human athlete.


Superhuman Durability: Man-Ape's bodily tissues are somewhat harder and more resistant to certain types of injury than the body of an ordinary human. However, he is far from invulnerable. Man-Ape's body is more resistant to blunt force and impact trauma than the body of an ordinary human. For example, he can withstand being hit repeatedly by a superhumanly strong adversary or falling from a height of several stories with little to no injury to show for it, whereas an ordinary human would be severely injured or killed.

Man-Ape is a seasoned warrior and skilled hand to hand combatant. Since gaining his powers, he's become an even more formidable combatant.

Retrieved from "https://marvelcomicsfanon.fandom.com/wiki/M%27Baku_(Earth-1010)?oldid=42446"
Community content is available under CC-BY-SA unless otherwise noted.