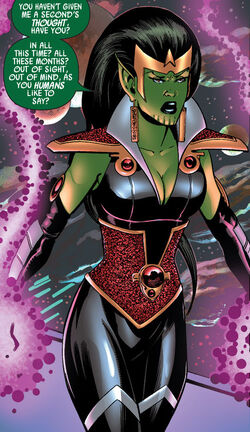 First appearance
U Got the Look
(as Queen Veranke)

Lyja, thank you for protecting my throne with such… Passion.

Lyja was a member of the Dard'van Sect led by Veranke. She was part of the team who went rescue their leader from exile, and when Veranke rose to power, she became her most loyal handmaiden and an excellent soldier.

While Queen Veranke carried out her infiltration of Earth, she tasked Lyja to shapeshift into her and take her place as Queen, and Veranke praised her for her passion leading the Empire.[1]

Retrieved from "https://marvelcomicsfanon.fandom.com/wiki/Lyja_(Earth-1010)?oldid=215983"
Community content is available under CC-BY-SA unless otherwise noted.