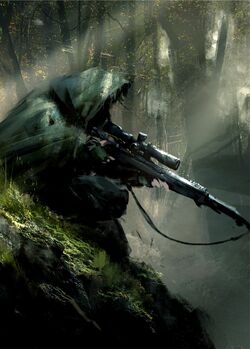 So you named yourself after the greatest assassin in history? I hate to admit it but you will never become like him, that guy's a legend...

Luther Manning was a soldier who was also a World War II soldier known by his codename, Deathlok and was known to be the "World's Greatest Assassin" at the time, due to his proficient marksmanship and an expert at using different weaponry. He also joined the Vietnam War after becoming a super-soldier for a long time until he was critically injured during the war, impairing him after losing both his legs and one arm.

After the Vietnam War, he eventually accepts the offer of the National Security Agency in exchange for fixing his body by having a cybernetic arm and legs. He became an elite mercenary, hired by the NSA to assassinate every person who were possible threats to the U.S. Government and this includes several Hydra and even S.H.I.E.L.D. members, if necessary. There he became the legendary mercenary Deathlok once again.

His last known mission was to assassinate Baron von Strucker (for the NSA believes that Hydra all the classified files that belongs to the U.S. government), but failed after he was critically injured getting shot in the neck by an undercover S.H.I.E.L.D. agent, mistakenly believing he was a Hydra agent. He suddenly disappears and manages to escape, although his current whereabouts are unknown.

Decades later, he was eventually found in an abandoned shack by a group of teenagers, dead where they became frightened and immediately called 911. His lifeless body was later found by S.H.I.E.L.D. and was ready to be recovered, until one of the agents inspected his cybernetic arm (causing it to somehow activate an explosive in Luther's vest), suddenly causing an explosion, blowing up the shack, killing the agent and everyone else near the site. It was confirmed that Luther had died from his injuries and losing too much blood after examining his corpse, moments before the explosion had occurred.

Retrieved from "https://marvelcomicsfanon.fandom.com/wiki/Luther_Manning_(Earth-61615)?oldid=220145"
Community content is available under CC-BY-SA unless otherwise noted.