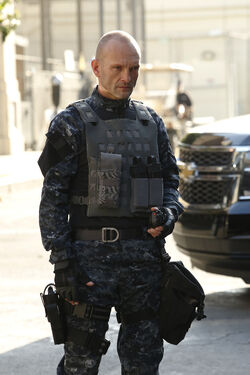 We had him pinned down but the target escaped."
"He didn't escape; he was extracted.

Banks was charged by Rosalind Price of the Advanced Threat Containment Unit to lead their team of soldiers in tracking down and capturing any Inhumans who appear as a danger to the citizens. One of these incidents involved Joey Gutierrez, a man who gained the ability of melting metal. Banks led his team to capture Gutierrez but when he used his powers to melt the team's guns, Banks deemed him too dangerous and gave the kill-order.

Before they could enact this order, Gutierrez was extracted by a S.H.I.E.L.D. team led by Daisy Johnson. As Banks pushed the citizens back and began to clean up the area, Rosalind Price arrived in her car for a mission update. Banks reported the incident to Price and assured her that they were continuing to secure the area; however, she told him that it was unacceptable that Gutierrez had escaped and they had gotten so much media coverage during the mission. She then ordered him to continue securing the area.

Back at their headquarters, Banks and Price discussed his failure to capture Gutierrez. As they talked about how many Inhumans were appearing across the country, Banks and Price looked at the room filled with the bodies of the Inhumans they had found; many of whom had been found dead and with a hole blasted in the centre of their chests. Price made it clear that she was not happy that one of the subjects had gotten away and insisted that Banks find him as quickly as possible.

Ambush on a Train

When Rosalind Price became aware that S.H.I.E.L.D.'s leader Phil Coulson was hunting her, she set up a trap to capture him on a train. When Coulson and Lance Hunter tried to speak to Price, Banks and a team from the Advanced Threat Containment Unit held him at gunpoint and handcuffed them to seats. Price and Coulson questioned one another and soon became aware that nether one of them were responsible for the brutal murders of Inhumans. When Price left to answer her phone, Coulson tricked Banks and attacked him; Hunter then sent in a rescue pod and the pair escaped.

Following the call Price received on the train, Banks and his team accompanied Price to a nearby hospital where a mysterious attacker had killed several guards, using the same deadly energy beam they had been investigating, and wreaked havoc across the hospital, ripping holes through the walls and floors, terrifying the patents and doctors. Banks spoke to Doctor Tina Adams who reported that her co-worker Lincoln Campbell was one of the Inhumans and had battled the attacker within the hospital alongside another woman with powers.

We have a location on Lincoln Campbell. He's holding up in an apartment outside of Chicago."
"You know what you need to do.

Having learned of his location, Banks led a team to capture Lincoln Campbell, who had gone of the run since the battle at the hospital. As Banks and his team began to catch up with Campbell, they chased him down in a wooded area and Banks gave the order to use lethal force if needed. When Campbell ran into open ground it seemed he was caught; however, Campbell used his powers on a nearby power line and caused sparks to rain down, separating him and the ATCU. Banks was forced to call Rosalind Price and tell her that Campbell had escaped.

Banks met with Price in her car where they discussed Campbell's abilities and how he was able to escape, commenting on how they had alerted the public to the manhunt. As they were talking, a call from the White House came in, but when Price answered it, it turned out to be Phil Coulson who was attempting to get a meeting with Price. As she spoke to Coulson, Banks got a call giving him Campbell's location. Upon confirming with Price, Banks was ordered to hunt him down and bring him in.

uo you really think you can stop me? Do you have any idea what I can do?"
"Yeh, that's why I have three snipers outside ready to engage. What's the range on these powers of yours, how good are they?

Taking a full team of ATCU agents, Banks charged into the apartment block where Lincoln Campbell was hiding out. They broke into the flat where he was reported to be hiding and found John Donnelly, the man who had called them, lying dead due to a heart attack. Banks' men searched the apartment and quickly found that Campbell was missing.

Due to an agreement made between Rosalind Price and Phil Coulson, Banks joined forces with a reluctant Alphonso Mackenzie to bring Campbell into the Advanced Threat Containment Unit's custody, finding him speaking with Daisy Johnson, who was furious at the change in plan. When Banks ordered his men to take him into custody, Campbell responded by setting off an electric shockwave on the ground which sent Banks and his men flying backwards. Campbell then escaped before Banks and his men could recover. With Campbell gone, Banks revealed their back-up plan was to take Johnson into custody instead.

Banks found himself in a stand-off against Johnson and Mackenzie, with Johnson threatening to use her powers against him and Mackenzie aiming a gun to his head and ordering him to stand down. Banks informed them that he had put snipers outside as protection in case they attacked. Before a firefight could start, Banks received a call from Rosalind Price who had worked out a new deal with Phil Coulson to combine their agencies. Banks ordered his men to regroup and they departed.

Any signs of life inside?"
"All quiet, perimeters locked up."
"Once the threats contained our holding facility is prepped to take him.

As the alliance between the ATCU and S.H.I.E.L.D. went underway, Banks was contacted by Daisy Johnson about a virus found of the computer of two murdered Inhumans. They later joined forces outside the home of the hacker responsible for sending the virus, Dwight Frye. Banks joined Johnson and a team into Frye's home where Johnson soon captured him, however Frye appeared to have an allergic reaction to Johnson's Inhuman powers. Due to Banks' recommendation, Phil Coulson ordered Johnson to leave so Frye could be questioned by Coulson and Rosalind Price.

When Coulson and Price completed their questioning of Frye, who revealed he worked for Lash, providing him with the locations of Inhumans so he could kill them, Banks took Frye to their van to be taken back to the ATCU's base for lock up. Price made a deal with Coulson and agreed to allow Daisy Johnson and Alphonso Mackenzie ride in the van with Frye so they could overlook their facility, but first Price ordered Banks to head their first to secure it and hide their classified information from S.H.I.E.L.D.. On their way to the base however, the van was attacked and Frye was murdered by Lash.

After the death of Dwight Frye, Daisy Johnson came up with a theory that Lash was one of the ATCU. Alphonso Mackenzie suspected it was Banks and the two including Lance Hunter and the three tailgated him. Hunter took his chances and shot Banks unconscious outside wearing a bandana. The three had his blood tested by Jemma Simmons, who reported that Banks was 100% human and that Daisy's theory was incorrect. The three placed him back in his car still unconscious.

Come with me, I'll get you out of here. If you're worried you can't trust me, worry on the move.

Banks entered Endotex Labs with Giyera and learned that there had been a security breach in the computer network. When he and Steve Wilson walked over to where the computer technician was working, Banks learned that the technician was Lance Hunter undercover. Banks chased Hunter through the facility, but the S.H.I.E.L.D. agent entered a passageway that locked behind him. When Banks entered his security password to continue the chase, it did not work.

While Banks tried to locate Hunter, he received a call from Rosalind Price telling him to assist the agent in evacuating the ATCU facility as she had learned that the ATCU was being secretly run by HYDRA. Eventually Banks caught up to Hunter after he had incapacitated Giyera and several other guards. Banks told Hunter to follow him, regardless of whether or not he trusted him and he escorted him to their rendezvous with a Quinjet piloted by Melinda May and Lincoln Campbell.

Banks went to the Playground where Alphonso Mackenzie introduced him Leo Fitz and Jemma Simmons; Banks said that he would do whatever it took to avenge the death of Rosalind Price. He told them of how he and Price infiltrated NASA and became a part of the project "Distant Star", while the scientists told him the origin of HYDRA.

The three and a S.H.I.E.L.D. unit decided to search Endotex Labs for anything they could find on Gideon Malick and his relationship to the Distant Star Pathfinder Project. However, Banks was unable to let go of his gun as Giyera controlled it to eliminate the S.H.I.E.L.D. unit before Giyera turned the gun around and delivered the final shot to Banks' head.

Retrieved from "https://marvelcomicsfanon.fandom.com/wiki/Luther_Banks_(Earth-1010)?oldid=129012"
Community content is available under CC-BY-SA unless otherwise noted.