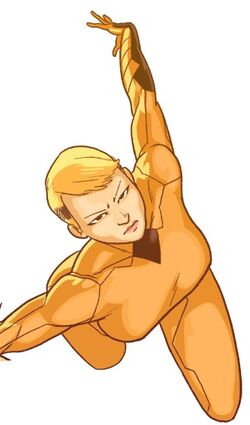 Crystal and Quicksilver met on the Avengers, and soon fell in love. However, soon after Luna's birth, Crystal deserted Quicksilver. She was left purely to be raised by Quicksilver, so this one event alone would define the rest of Luna's life.

Being raised by Quicksilver was not a great way to grow up. He was always fast-tempered, and as much as he tried, he was not fit to be a father. She spent time with the Avengers, but she did not feel like she belonged. Discovering her mutant powers of super-speed, she fled, and tried to find a place where she could belong. Luckily, her father talked of the place where her mother was: the Baxter Building, home of the Fantastic 4.

So, she found the building, and she told the 4 who she was. She explained what her powers were, why she was there, and that she wanted to join the 4. She was welcomed onto the Fantastic 4 (now the 5), but then she said that she would not stay, and she would not wear a team uniform. This was her Quicksilver talking, and it bothered the team. So they decided that she would be considered a trainee rather than a member, and when she proved herself worthy, she would meet her mom. In the meantime, she became good friends with her half-brother Daniel.

Aerokinesis: Empath has the ability to manipulate the air. So far she has only shown it through:

Emotion Control: Empath's namesake power is the ability to sense, remove, and alter emotions at will.

Elementalism (latent pyrokinesis, hydrokinesis, greater aerokinesis, and geokinesis): Due to Crystal being her mother, it is theorized that Empath might one day be able to manipulate the elements as her half-brother does.

Retrieved from "https://marvelcomicsfanon.fandom.com/wiki/Luna_Maximoff_(Earth-1175)?oldid=58646"
Community content is available under CC-BY-SA unless otherwise noted.